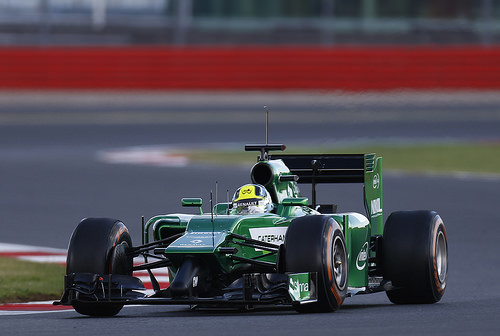 Leafield Technical Centre, UK – 15th July 2014
Quick description
Race Laps: 67
Combination of high speed corners (>240 kph T1 and T12), long full throttle distance (1100mts) and slow corners where good traction is very important (T2, T6, T8 and T13 in slight banking)
Generally longitudinal track
Some bumps in T2, T6 and T17
Plank wear could be an issue in T5 (long corner)
Aero settings are usually medium, to favour top speed and enable overtaking
Medium braking levels
Circuit Particularity
Bumpiness: medium / high
Kerbs: low
Ride height setting particularity: none
Engine severity: medium
Gearbox severity: medium
Lat / Long grip: longitudinal
Aero eff ratio: medium
Track grip evo during w/e: medium / high
Aero settings: medium / high
Brake wear severity: medium
Brake cooling necessity: medium
Quotes
Kamui Kobayashi, car #10: “The last two races before the summer break are Germany and Hungary, both tracks I like but in particular Hockenheim – I have been testing and racing at this track so many times throughout my carrier since I came to Europe. So, in a way, this is one of my home tracks!
“The German Grand Prix, whether it’s at Hockenheim or Nurburgring, always has fantastic support from the fans – it’s like Silverstone and the atmosphere, especially on Sunday at Hockenheim, is amazing!
“For us this will be another race where we aim to fight back against our nearest rivals. We did not see the full performance of the cars in Silverstone for various reasons, particularly for me as I had issues with the car on both Friday and Saturday. Then on Sunday I lost a chunk of downforce when I had to go off-track to avoid the shunt on lap one – that cost me so much laptime. So, I did not have a proper drive throughout the whole weekend! But I’m determined to make sure that all the problems are now gone and I’m ready to fight back in Germany and Hungary.”
Marcus Ericsson, car #9: “Germany is one of the races I’ve been really looking forward to. I know the track well as I’ve raced there in GP2 and I think it’ll be a great challenge in a 2014 F1 car – there’s a good mix of really quick bits and some slower corners where you can overtake, and the noise the German fans make all weekend is amazing! Actually, it’s one of the races that a lot of Swedish fans make it to, so seeing my country’s flags in the crowd – that’ll make it even more special.
“Inside the car I think we know it’s going to be another challenging weekend for us in terms of the pure pace, but the team learnt a lot from the two day test we did in Silverstone after the British GP and we’ll be looking to put that into practice on track. The key thing for me is to make sure we have maximum mileage all weekend, especially on Sunday when we need to be there at the end of the race. We’ve seen this year that the races are very unpredictable and for us that can create opportunities, but if we’re not on track when the chequered flag falls we can’t take advantage of whatever’s happening around us, so that’s the main goal.”
German GP lowdown with Renault Sport F1 track support leader, Cedrik Staudohar
Main challenges of Hockenheim for the Power Units: “Like Silverstone, it will be the long periods of wide open throttle. Almost two thirds of the circuit is taken at full throttle and drivers will reach over 300kph four times in the first half of the lap. The ICE, turbo and MGU-H will be under huge pressure for these stretches.”
Main energy recovery points: “The stadium section with its three tight corners and the hairpin at the end of the curved Parabolika straight are the best opportunities for the MGU-K to recover energy under braking. In fact most of the corners are low or medium speed so give an opportunity to recharge the battery.”
Difficulty rating: “One the harder races of the year since every part of the Power Unit will get a work out. The high ambient temperatures and increased running temperatures of the PU due to the excessive loads also give us plenty to look out for!”
What to watch out for: “The Parabolika is over 1km long and drivers will peak at over 300kph before braking down to under 60kph for the Hairpin at the end of the straight. The bias will go from the ICE and turbo to the MGU-K in just over a couple of seconds.”