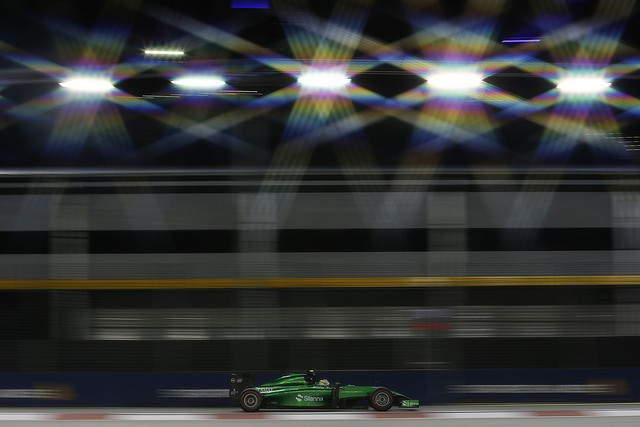 Marcus Ericsson, car #9, chassis CT05-#04: “What a race! One of the best of my season so far, I have no doubt about it. I’m very pleased and happy for the whole team – this result is a great way of saying thank you for all the hard work and effort they put in yesterday. We can be very happy as we beat our closest rivals fair and square after having struggled quite a lot to keep up with them this weekend. We maximised our performance today. We followed a great strategy and I didn’t make any mistakes. I’m very pleased but we have to carry on working as hard as ever in order to build on this and make progress every race.

“We decided to stay out on the Prime tyres and I knew that Bianchi was going to catch me as he pitted in front of me, so I prepared myself as best as possible for the final four laps. I managed the tyres well and kept him behind. A great effort!”

Kamui Kobayashi, car #10, chassis CT05-#02: “What a frustrating way to end the race weekend here in Singapore. During the formation lap, all of a sudden I felt no power and then it smelt as if something was burning. Then I suddenly lost the brakes so I decided to stop the car because it was dangerous and I had nothing to do. I was really looking forward to this race and it’s a shame not to have been able to get out there and fight, but this happens sometimes in motorsport unfortunately.”

Manfredi Ravetto, Team Principal: “It’s ended up being a very positive weekend here in Singapore. We’ve managed to beat Sauber from a reliability point of view as well as beating Marussia out on track for the second race weekend in a row. We are definitely on our way up. I would like to thank every single member of the team, both here on track and back at the factory in Leafield – we’ve all worked very hard and I am proud of the whole team.”

Cedrik Staudohar, Renault Sport F1 track support leader: “A great result for the team, with Marcus finishing ahead of both Marussias. From our side, however, it was not the most straightforward race. Unfortunately Kamui lost the CU-H at the start of the formation lap and had to stop. We need to look at why this happened in more detail back at Viry. Marcus also had some issues with the energy management system, so it was not optimal from a performance perspective. Nevertheless, we finished ahead of both of our closest rivals, which is a fantastic team effort.”