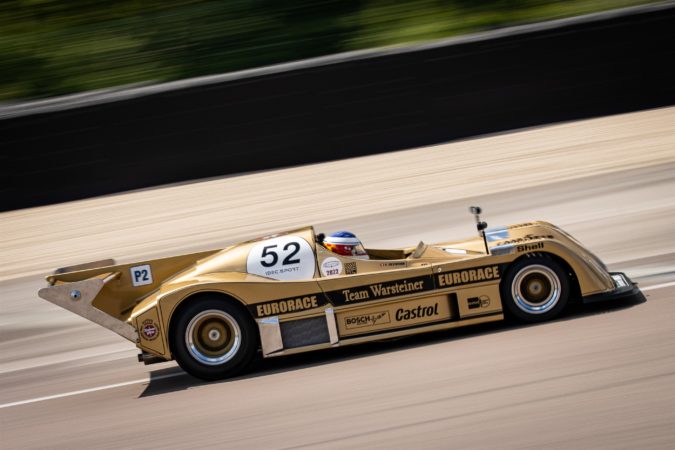 Bœuf bourguignon, œufs en meurette, Dijon mustard…. There’s no doubt that we’re in the Côte d’Or for the Grand Prix de l’Âge d’Or on the Dijon Prenois circuit, which is celebrating its 50th anniversary this year. The short track in Burgundy which measures 3 800 metres is a redoubtable challenge with the blind La Bretelle corner, the uphill Parabolique hairpin and the very fast Pouas curve that seems to go on forever. Despite poor weather forecasts and threatening skies for a good part of the weekend, 6200 spectators turned up to admire the 220 racing cars and the Formula 1 machines from the Prost-Senna-Schumacher era. Powered by normally-aspirated 3.5-litre engines their bewitching music resounded all round the circuit during their demonstration runs on Saturday and Sunday. Now’s the moment to unveil the results of the nine races that punctuated the weekend in Burgundy, which finally turned out to be hot and sunny!

As expected the race boiled down to a no-holds-barred scrap between the Cobras and Daytona Cobras in the Sixties’ Endurance event. For a long time it looked like victory would go to the no. 51 Shelby Cobra 289 driven by Maxime Guenat and Guillaume Mahe. Unfortunately, an oil pressure issue forced this car to pit. Pierre-Alain and Erwin France inherited the lead in the no. 70 Shelby Cobra Daytona Coupe, but they were hit with a 15-second penalty for a pit stop infringement. The upshot was that Saif Assam and Sam Hancock in their no. 370 Shelby Cobra 289 took over first place and went on to win the race with 24 seconds in hand over the France family. There was also suspense in the battle for third place because of the 15-second penalty given to the no. 355 Cobra 289 driven by Harvey Stanley and Jérémy Cottingham, which helped Charles de Villaucourt in the no. 12 Shelby Cobra 289 to clinch the final place on the podium. The quickest of the non-Cobras, the no. 27 3.8 E-Type Jaguar in the hands of Maurizio Bianco, came home in fifth place overall.