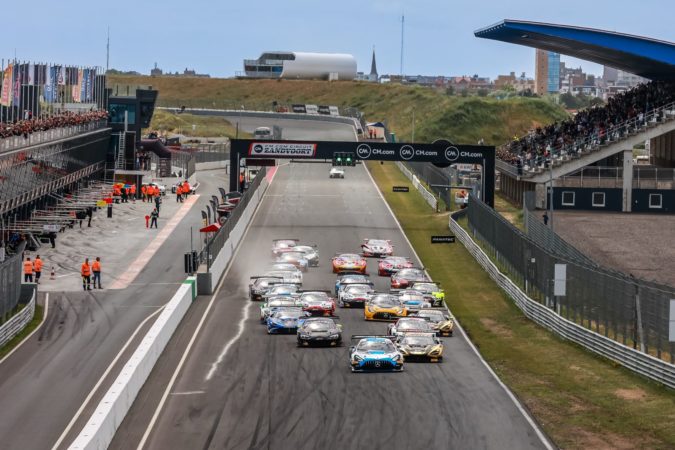 Akkodis ASP earned a third Fanatec Sprint victory of 2022 thanks to another perfect team performance from the #89 Mercedes-AMG of Raffaele Marciello and Timur Boguslavskiy in today’s race at Zandvoort.

Marciello started from pole after topping this morning’s qualifying session by more than half a second, the Swiss driver delivering a brilliant performance on a track made treacherous by overnight rain. The circuit was dry by the time racing got underway, but the Mercedes-AMG ace was once again in a class of his own, maintaining his advantage into turn 1 and immediately building an advantage

Behind him the battle for P2 raged for the opening 30 minutes. Vincent Abril held second in the #112 JP Motorsport McLaren, while Dries Vanthoor (#32 Team WRT Audi) leapfrogged Dennis Marshall (#66 Attempto Racing Audi) to run third. Vanthoor was marginally faster than Abril, but the McLaren’s superior acceleration off the final corner proved vital.

The Team WRT man also needed to keep an eye on his mirrors, with Marschall able to match his pace. All of this was to the benefit of Marciello, who was able to pull several tenths clear with each passing lap. His advantage was more than eight seconds by the time the pit window opened, at which point Abril immediately ducked in to hand over to teammate Dennis Lind.

With this being the team’s first Pro entry at a Fanatec Sprint weekend, the JP Motorsport crew faced a difficult task to match the pit stops of vastly experienced rivals such as Attempto Racing and Team WRT. Attempto Racing was able to send Pieter Schothorst out ahead of Lind, and when Vanthoor stopped one lap later to hand over to Charles Weerts the #32 Audi also made up a place to assume second.

Marciello went as long as possible before stopping to hand over to Boguslavskiy. Akkodis ASP delivered a clean stop and the #89 Mercedes-AMG was back on-track with a comfortable lead over the #32 Audi. Up to this point the race had followed the same pattern as the second contests at both Brands Hatch and Magny-Cours, but on this occasion there was a plot twist.

Moments after Boguslavskiy left the pits there were yellow flags in the middle sector for the stranded #111 JP Motorsport McLaren of Patryk Krupinski, who had made contact with the #12 Tresor by Car Collection Audi and come to a stop beside the track. This was dealt with under full-course yellow conditions, after which the safety car was deployed.

The field was closely packed when the restart was given with a little under 20 minutes left on the clock. Boguslavskiy led from Weerts, while Schothorst occupied third and Jules Gounon ran fourth in the #88 Akkodis ASP Mercedes-AMG after taking over from Jim Pla. Behind him, Lind held fifth place in the remaining JP Motorsport McLaren.

Boguslavskiy made a good restart, but Weerts immediately closed up and began to apply pressure to the Akkodis ASP driver. With overtaking opportunities at a premium the race would depend on Boguslavskiy’s ability to avoid mistakes; indeed, one missed apex would be enough to allow Weerts through.

Behind the leaders Schothorst was under immense pressure from Gounon, who searched high and low for a way around the Dutchman. His best opportunity came with a run around the outside at turn 1, but Schothorst held the lower line and prevented a pass.

Boguslavskiy was equally cool under fire, delivering a faultless run to fend off Weerts. The #89 Mercedes-AMG maintained its record of winning the second race at every Fanatec Sprint event this season, taking Boguslavskiy and Marciello to within just half a point of championship leaders Weerts and Vanthoor.

While the winners celebrated in parc fermé, the happiest man of all was Schothorst. The Dutch driver kept Gounon at bay to score a podium at his home event, sparking jubilant scenes among the Attempto squad. The #88 Mercedes-AMG was fourth, followed by the #112 JP Motorsport McLaren, which earned an excellent result on the Polish squad’s maiden Fanatec Sprint outing with a Pro car.

Dinamic Motorsport scored a season-best finish of sixth with the #54 Porsche of Christian Engelhart and Adrien De Leener, followed by the #25 Saintéloc Junior Team Audi. The Silver Cup podium completed the overall top-10 with Attempto Racing taking a second win of the campaign thanks to its #99 crew of Alex Aka and Nicolas Schöll. They edged the championship leading #53 AF Corse Ferrari, while Team WRT completed the class podium with its #30 Audi.

The #188 Garage 59 McLaren took Pro-Am victory and reignited the British squad’s title challenge. Dean MacDonald started from class pole but was passed at the start by rival Christian Klien (#111 JP Motorsport McLaren), the two running with the overall leaders during the opening stint. The JP squad’s chances ended when Krupinski was eliminated shortly after the pit window, handing the advantage to Miguel Ramos. The Portuguese driver came home ahead of the #52 AF Corse Ferrari shared by Louis Machiels and Andrea Bertolini, while the sister #21 Ferrari recovered from an early puncture to complete the class podium.

With the Zandvoort weekend complete, teams will now travel directly to the Belgian Ardennes to undertake the TotalEnergies 24 Hours of Spa test days (21–22 June). The next Fanatec Sprint contest at Misano follows just over a week later (1–3 July), while the marquee race takes place at the end of the month (28-31 July). After another highly competitive encounter, Team WRT and Akkodis ASP look set to continue their battle for championship glory through this crucial phase of the 2022 season.