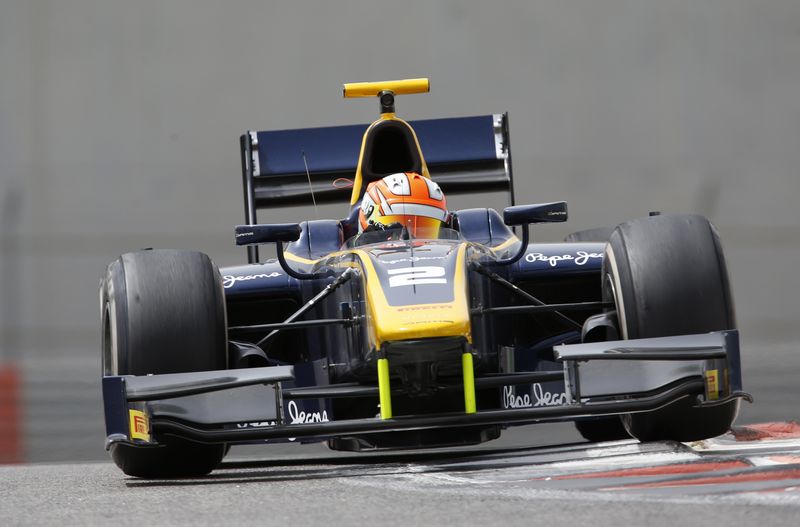 DAMS driver set fastest laptime of second pre-season testing day Yas Marina Circuit
The second day of pre-season testing at Yas Marina circuit opened in windy conditions. Stoffel Vandoorne set the early pace ahead of Alexander Rossi and Arthur Pic as most drivers focused on long runs and race simulations this morning. At the halfway mark, Alex Lynn took control of the time sheets with a laptime of 1:50.602. As the clock ticked down, the British driver put on super soft Pirelli tyres and improved further to dip under 1m50s. His teammate and yesterday’s fastest man Pierre Gasly (also on super softs) moved up to P2 in the closing stages and at the chequered flag, both DAMS cars sat pretty at the top of the standings ahead of Raffaele Marciello. The Italian driver set the exact same laptime as Vandoorne, but he did it earlier than the Belgian ace. Mitch Evans, Rossi, Julian Leal, Pic, André Negrao and Jordan King rounded up the top ten.
The afternoon session meant more long runs for the drivers. Sergey Sirotkin was the first man to feed onto the track, but it was Vittorio Ghirelli who set the early pace until Richie Stanaway went top midway through the session. His laptime was bettered by Marciello and the Italian was unchallenged until a first red flag period, courtesy of Rio Haryanto who stopped his car in the start/finish line. At the restart and with one hour left on the clock, Norman Nato went quickest in a 1:50.858, but he caused a second red flag period after he stopped at Turn 20.
The pitlane went green with twenty minutes left in the session and some drivers decided to switch to super soft compounds, including Nato who was able to re-join the field in the closing stages and managed to improve further on his best laptime. When the chequered flag dropped, his laptime of 1:49.697 meant he finished the session on top, but it was Lynn who was declared the fastest man of the day. Behind Nato, his teammate Negrao moved up to P2 in the dying minutes ahead of Marciello, Sergio Canamasas, Rene Binder, Vandoorne, Sirotkin, Zoel Amberg, Nobuharu Matsushita and Stanaway.
Tomorrow’s morning session will start at 09.00, local time.
Morning results
Afternoon results
il 11 Marzo 2015   /   GP2