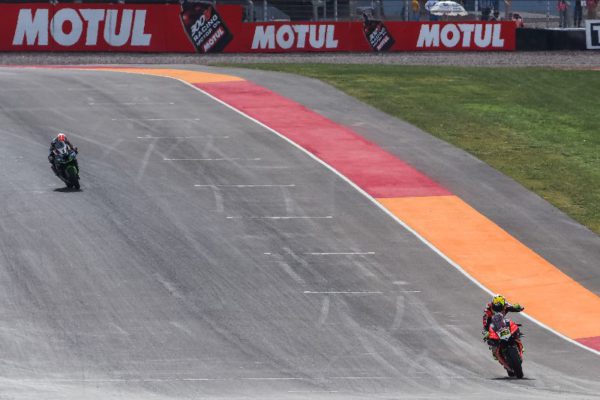 The opening race of the Motul Argentinean Round at the Circuito San Juan Villicum would see a frantic race for WorldSBK’s second visit to South America. It was a thrilling duel at the front between four race winners in 2019, with an enthralling battle making it one not to miss. Coming out on top and returning to the forefront of the battle for wins, Alvaro Bautista (ARUBA.IT Racing – Ducati) stormed to success in San Juan.

With the race getting underway, it was Jonathan Rea (Kawasaki Racing Team WorldSBK) who got the launch and barged his way ahead of Alvaro Bautista at Turn 1, but Michael van der Mark (Pata Yamaha WorldSBK Team) capitalised on the two ahead of him nearly colliding to take the lead. Toprak Razgatlioglu (Turkish Puccetti Racing) was right in contention and nearly clashed with 2020 teammate van der Mark. Alex Lowes (Pata Yamaha WorldSBK Team) was a strong fifth place whilst Tom Sykes (BMW Motorrad WorldSBK Team) had risen to sixth early on.

The race settled down, and the leading four began to battle with each other. Bautista set a strong pace out front, but Jonathan Rea’s relentless pace meant that a battle soon ensued out front. Swapping and changing between the top two in the Championship. A pattern began to form, with Bautista’s Ducati strong in a straight line but Rea’s Kawasaki able to be all over the Spaniard in the corners. Waiting to pick up the pieces were Razgatlioglu and van der Mark, whilst Leon Haslam (Kawasaki Racing Team WorldSBK) began to pick his way through the field.

With 16 laps left to complete, Michael van der Marks started to drop back from the leading three, as the pace increased. Bautista began to slam in fastest lap after fastest lap and two laps later, Razgatlioglu was the next to be jettisoned from the leading group. Jonathan Rea valiantly remained with the Spaniard, getting ahead briefly at Turn 6, only for Ducati power to prevail. Rea would stay on the back of Bautista for a few lap laps, but the five-time Champion couldn’t live with the pace of Bautista.

Meanwhile, Tom Sykes had dropped back, as had eighth-place starter Alessandro Delbianco (Althea Mie Racing Team), down in tenth and battling hard with home-favourite, Leandro Mercado (Orelac Racing VerdNatura), both having superb races inside the top ten. Behind them, Michael Ruben Rinaldi (BARNI Racing Team) had suffered badly and pulled into the pits, although he returned to the track later on.

Further ahead of the battle for the lower positions in the top ten, Alex Lowes was being reeled in by Leon Haslam. The battle between the two was now turning from contract signatures to on-track positions, although the ‘Pocket Rocket’ looked like he would have more pace than Lowes in the closing stages. However, it wouldn’t be the case and Lowes would eventually hold on to fifth position.

With Bautista clearing off at the front, the battle for second ignited, as Razgatlioglu closed in on Jonathan Rea. The Northern Irishman was making mistakes, particularly at Turn 6, allowing the Turkish star to get on terms. But neither would be able to challenge an incredible Bautista, who returned to winning ways after taking a round off at Magny-Cours. Jonathan Rea took second and resisted Razgatlioglu’s onslaught. The Turk wrapped up the accolade of Best Independent Rider in 2019. Fourth went to a determined Michael van der Mark whilst teammate Alex Lowes completed the top five.

Sixth position was Leon Haslam, who faded in the closing laps, whilst Tom Sykes was seventh and top BMW. Eighth place went to Jordi Torres (Team Pedercini Racing), as the second Independent rider home. Leandro Mercado made it to ninth position to the delight of the home crowd, making up for missing FP3 and the Tissot Superpole session. It was a second top ten of the season for a sensational Alessandro Delbianco, with the Honda rider making it all five manufacturers inside the top ten.

Before the race began, there was a division about riders racing due to the dusty track conditions. The following riders elected not to race, meaning 12 riders took to the track for Race 1: Chaz Davies (ARUBA.IT Racing – Ducati), Sandro Cortese (GRT Yamaha WorldSBK), Marco Melandri (GRT Yamaha WorldSBK), Leon Camier (Moriwaki Althea Honda Team), Ryuichi Kiyonari (Moriwaki Althea Honda Team) and Eugene Laverty (Team Goeleven).
P1 – Alvaro Bautista (ARUBA.IT Racing – Ducati)
“It’s my first time riding here in San Juan and I am so happy that I was able to get the victory at this amazing track with all these amazing people supporting us! Today was really difficult riding on the slippery surface of the asphalt. I just tried to keep calm and avoid mistakes. I didn’t really focus on my performance but more on not making any error, trying to ride as smooth as possible. I hope tomorrow we will be able to enjoy other amazing battles”.

P2 – Jonathan Rea (Kawasaki Racing Team WorldSBK)
“To be honest, it was a really difficult race today. The conditions of the track were not perfect and it was more about trying to manage my race. I feel really good with my bike and I want to thank all my guys because we made a last-minute change for these conditions and I think it worked. I tried to be with Bautista, but then I made a mistake because I was riding over my head to stay there. I made a few mistakes but I really hope that the track will be a little bit better tomorrow, but for today I am quite content with the podium”.

P3 – Toprak Razgatlioglu (Turkish Puccetti Racing)
“It has not been so easy for me, but I think all riders were struggling today. In the final two laps, I pushed to the limit in the attempt to reach the second position. But then I saw it was impossible for me to reach Johnny, so I decided to settle there in the third position and bring home another podium. I am really happy about this result. Let’s see how will be tomorrow”.
#ARGWorldSBK at Circuito San Juan Villicum: Race 1
1. Alvaro Bautista (ARUBA.IT Racing – Ducati)
2. Jonathan Rea (Kawasaki Racing Team WorldSBK) +1.562
3. Toprak Razgatlioglu (Turkish Puccetti Racing) +3.327