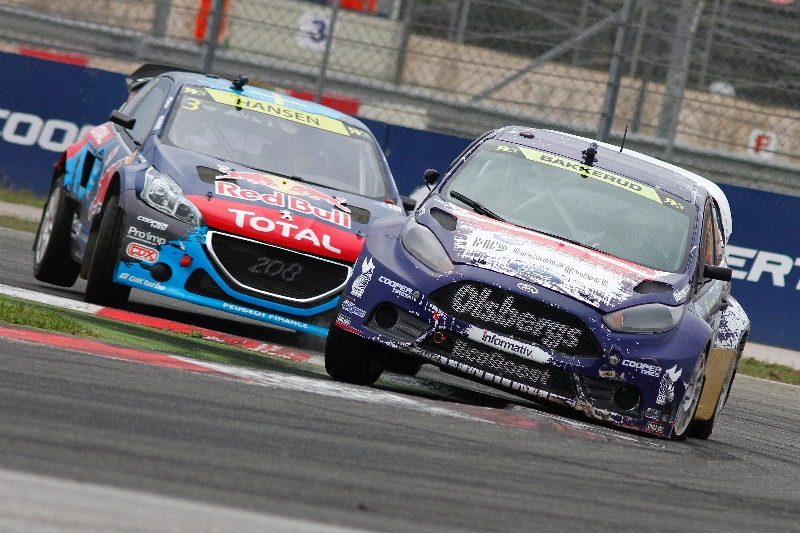 Ford Olsbergs MSE driver Andreas Bakkerud has won this weekend’s World RX of Turkey, the penultimate round of the FIA World Rallycross Championship presented by Monster Energy. Team Peugeot-Hansen driver Timmy Hansen and Volkswagen Marklund’s Topi Heikkinen finished second and third respectively. With Ford, Peugeot and Volkswagen all represented on the podium, the fight for the first ever Teams’ Championship will now be decided at the final round in Argentina next month.

Bakkerud, who celebrated his 23rd birthday on Friday, was delighted with his win at the Intercity Istanbul Park – the former F1 venue which staged the Turkish F1 race from 2005-2011. “This has been a great birthday present!,” beamed Bakkerud who also becomes the first driver to win a rallycross event in Asia. “We have been struggling slightly in the last couple of races but today everything came together and the car has been working perfectly.  The final race was just crazy – Timmy was really close to me, it could have gone either way but I was really pushing after the semis and I was hungry for the victory.”

Arguably the most impressive drive of the weekend, however, was that of Timmy Hansen who won three heats, semi-final one and the Monster Energy Super Charge Award. “I had the pace to win the final but I made a small mistake and Andreas jumped on the opportunity.  We had some close racing with Andreas, Topi and Henning and then after I took the Joker, all I heard on the radio was that I had to push.  I didn’t quite manage it but I’m happy with how the weekend has gone.”

Heikkinen’s third place in Turkey sees the Finn remain second in the overall drivers’ standings, 50 points behind Petter Solberg who has already secured the Championship title after accruing enough points at the previous round in Italy.  “Volkswagen Marklund are now leading the Teams’ standings by four points – we’ve been tied at the top on two separate occasions this year but now we are leading it by ourselves,” explained Heikkinen whose team-mate Anton Marklund finished one place behind in fourth.  “My driving hasn’t been perfect this weekend, I made a few small mistakes but I’m happy to have got some crucial points for the team.”

Rounding off the top five in Turkey was Monster Energy World RX Team’s Henning Solberg who claimed his best finish of the season so far in the Citroen DS3 Supercar. His younger brother Petter Solberg joined him on the back row of the final, but both siblings retired before the finish.

“I’ve been really pleased with the car this weekend, the handling and power has got better and better, and the team have worked very hard,” explained Henning. “We changed some small settings with the differentials and, now the car really is so fast. It was a shame we weren’t allowed to re-fuel because of a time limit before the finals, because this cost us a podium for sure, but it has still been a great day.”

EKS RX had a weekend of mixed fortunes with former WRC star PG Andersson showing flashes of speed but unable to reach the semis due to missing heat one on Saturday following an engine change on his Audi S1 Quattro Supercar. Team-mate Edward Sandstrom consistently challenged the World RX front-runners this weekend and the GT racer was rewarded with his first semi-final place. However, Sandstrom was later disqualified after it was discovered that his car was underweight.

In the RX Lites Cup, Swede Sebastien Eriksson was top qualifier overnight and continued his run of good form today to take the final RX Lites Cup win of the season.  “It’s been a perfect weekend and it’s great to have won the first RX race of the season and now the last.  This track really suits the RX Lites, especially with being so technical.  Congratulations to Kevin [Eriksson] for winning the RX Lites Cup – he’s been consistent all year.”

Kevin Hansen was awarded the RX Lites Cup runners-up spot, as well as finishing second in Turkey this weekend.  “We’ve missed two races this year so second in the Championship is a great result for us.”

Martin Anayi, World RX Managing Director for IMG Motorsports, concluded: “It’s been fantastic to bring rallycross to Asia for the first time.  The feedback we have received from the drivers about the track at Intercity Istanbul Park has been extremely positive, which just goes to prove that an F1 track can also be the perfect home for an RX race.  With only one round remaining, the battle for the Teams’ Championship is shaping up for a thrilling finale with Volkswagen, Ford and Peugeot all still capable of winning the title.  Having just completed our fourth RX event in five weeks, the teams and drivers will be looking forward to the six-week hiatus before they make the journey to Argentina where we will stage our first ever event in South America.”
The final round of the FIA World Rallycross Championship will take place in San Luis, Argentina, at the end of November.

DRIVER POINTS AFTER ROUND 11, WORLD RX OF TURKEY