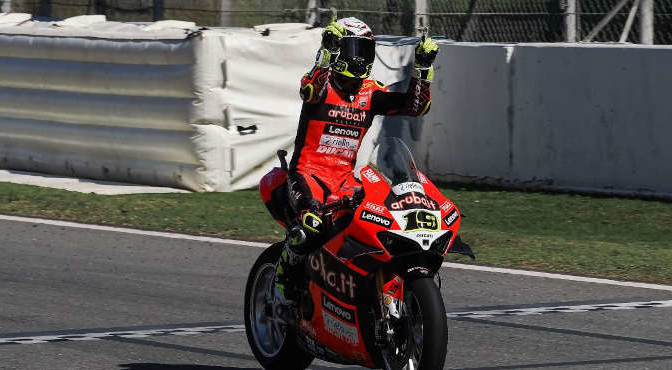 P1 – Alvaro Bautista (Abuba.it Racing – Ducati)
Bautista completed a hat-trick with Race 2 victory as he became the first WorldSBK rider with three wins in Barcelona.
He finished the race with a 8.103s gap over his teammate Rinaldi.
He extended his Championship lead to 59 points over Razgatlioglu.
It was his first hat-trick since 2019
“It seems like an easy weekend but, in reality, there was nothing easy. I’m so happy to have won three races here, especially because I think the competition is so high and even more difficult than three years ago. Saturday and Sunday, in the long race, I tried to manage the tyres and keep the pace. I felt quite comfortable. Honestly, for the Superpole Race, we were missing something so, today, in the Warm Up we tried something different on the electronics to help me use the tyre more and not worry about consumption. We tried, I liked it, so I used, and it definitely helped me a lot because it gave me a hand to use the tyre more. I could be fast in the Superpole Race and fight for the win. For sure, it was closer than the other races but also, I expected more fighting, more battling for the victory.
In the end, I don’t like to think about the Championship. I didn’t think about it at the beginning and I don’t think about it now. For me, the important thing is that I’m enjoying the bike a lot. I’m enjoying every practice, every single lap, every single race. Let’s keep this mentality and see what happens at the end. I’m just trying to enjoy the moment, celebrate the victory, to reset when things come back and just race and enjoy.”

P2 – Michael Ruben Rinaldi (Aruba.it Racing – Ducati)
Rinaldi finished in second place ahead of Razgatlioglu, making it a Ducati 1-2 and claiming his 14th podium.
He remains in fourth overall with a 32-point advantage over Locatelli.
“We knew yesterday that our expectation was the podium. But unfortunately, I made a mistake in qualifying and I started tenth. Then the race was a bit compromised, but the speed was there. The strategy in the Superpole Race was to start Race 2 in the first two rows and I did it. Today, I really enjoyed the race because I started well. But Jonny and Axel pushed really hard during the whole race. I had to battle really hard but at the same time manage the tyre because we knew what happened yesterday. I did it and I’m really happy because I had a good pace. I didn’t have the pace of Alvaro but in the end I’m really happy about this second place because it’s the second in a row.”

P3 – Toprak Razgatlioglu (Pata Yamaha with Brixx WorldSBK)
Razgatlioglu completed the top three for his 72nd podium.
He remains second in the standings and eight points adrift from Rea.
“For me, it was a very difficult weekend. In Race 1, we started very well but we finished in fifth place because we were eating the rear tyre. Today, my plan was just follow Jonny and Bassani and Rinaldi, because I know Alvaro is very fast. Today, I wanted to keep the rear tyre because I understood that first position was not possible in this race. I focused on second and third position. I am very happy that we’re back on the podium.
I am not focused on the Championship, I am just looking race by race. Portimao is a very good track for me and also Jonny is very strong, Alvaro is very strong. We are fighting again. Argentina will be a little bit difficult because of the very long straight, which is better for the Ducati, but I will keep fighting. I love Indonesia, and I think we are fighting for the win in Indonesia. Australia, I don’t know! We have many races and the Championship is not finished.”

P4 – Jonathan Rea (Kawasaki Racing Team WorldSBK)
Rea was battling for a podium place but ran wide at Turn 7 on Lap 16. After his mistake he was able to pass Bassani to take fourth.
He stands in third place in the standings with 327 points.
“The race was under control compared to our expectations until six laps to go. I was just behind Rinaldi, starting to plot how the end of the race would play out and I went into seven, found neutral but I was coming from fourth to third to second. I couldn’t stop the bike. It was all I could do… because I had no engine brake it was to stay upright. The front was jumping… anyway I stayed on the track. Rammed it back into gear… Axel came past but I made quick work of him. I focused on Toprak just to fight until the end. My rhythm was good in the end, but I just ran out of lap so. If you had given me that result at the beginning of the week, I’d probably have accepted it because it’s a really though track for us but after seeing our pace yesterday, understanding how the start of the race was, I felt like we left a little bit out there. But equally satisfied with our position. We had nothing for Alvaro this weekend. He was incredible, on a different level. But I felt like we got a lot from our bike, we even improved the settings of the bike at a circuit that is very difficult for us but we’ve still been able to fight.”

P5 – Axel Bassani (Motocorsa Racing)
Starting from 13th on the grid, Bassani was fighting for a podium place until Rinaldi and Toprak escaped. He then dropped to finish in sixth place.
“Really good Race 2. I tried to come back from 13th position. It was difficult but we arrived in second place. I tried to maintain second place but in the first half of the race, I finished the front tyre. I just tried to cross the finish line. We arrived fifth, this is really good for the Championship. It was a really difficult weekend for me, but we finish with a good result and we go to Portimao with good moral.”

P6 – Xavi Vierge (Team HRC)
Vierge completed the top six in Race 2 after taking advantage of his Superpole Race result.
“Finally, it has been a really positive weekend, especially on Sunday. We learned a lot. Yesterday was a tricky day. We had a good Superpole but then in the race the temperature dropped a lot. We decided to go with another tyre and I felt so bad with it in the race, I was struggling a lot and I had zero grip. We learned a lot from yesterday, we worked a lot on the electronic side and today with the temperature we were able to choose the tyre that works for us. And we could make a really good Superpole Race and Race 2.”

Two riders crashed out of the race on the opening lap with Alex Lowes (Kawasaki Racing Team WorldSBK) going down at Turn 10 and Scott Redding (BMW Motorrad WorldSBK Team) crashing at Turn 14; putting both riders out of the race. Redding was taken to the medical centre for a check-up following his crash and was declared fit but diagnosed with a chest bruise.

The Pirelli Portuguese Round will take place from the 7th to the 9th of October at the Autódromo Internacional do Algarve.