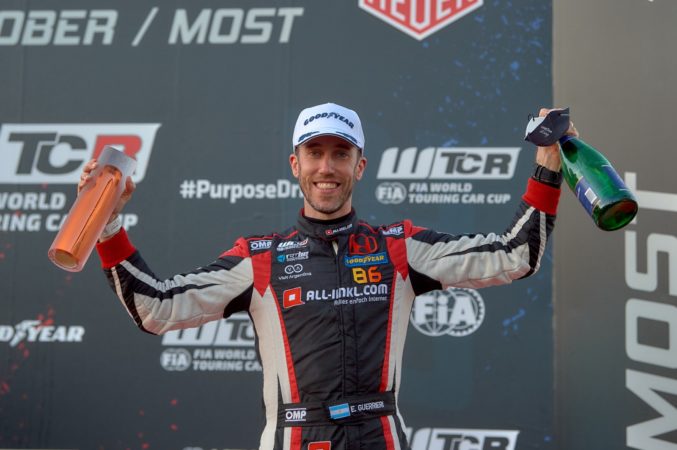 In the first four rounds of the season, Esteban Guerrieri could not make it to the podium, but he scored in every single race. This gave him the consistency, but big points were still on the run. The Argentine was confident for this weekend at Most, a new venue for WTCR, and showed great performance to reach the podium in both Sunday races.

“Today definitely goes down as a mission accomplished on what was a very important weekend; it was do or die if I wanted to keep my title hopes alive”, Guerrieri commented.

The Argentine, supported by Visit Argentina, qualified fourth on Friday and earned a 4th and 7th place for the grids, but was demoted to 9th for the first race for impeding Tom Coronel. Guerrieri moved up to second in turn 1 after an incident he could avoid.

“My strategy in Race One was to go around the outside, but something in my gut told me I needed to stay on the inside, and it paid off. I sat behind Nestor and the plan worked very well, so it was great to bring this reward for the team”, the driver from Mataderos said.

In the second race, after having clinched his first podium of the year a couple of hours before, he fought to move through the field and get into podium positions.

“Race Two was much, much tougher, and I had to push every lap, every corner. We made some changes to the car and to be honest I went the wrong way, but we got through it. We are back in the game now, so let’s play”, Guerrieri stated.

Next weekend the WTCR will race its sixth round of the season at France, in the circuit of Pau-Arnos. The driver from #86 Honda is now second in the championship, 20 points behind leader Yann Ehrlacher.