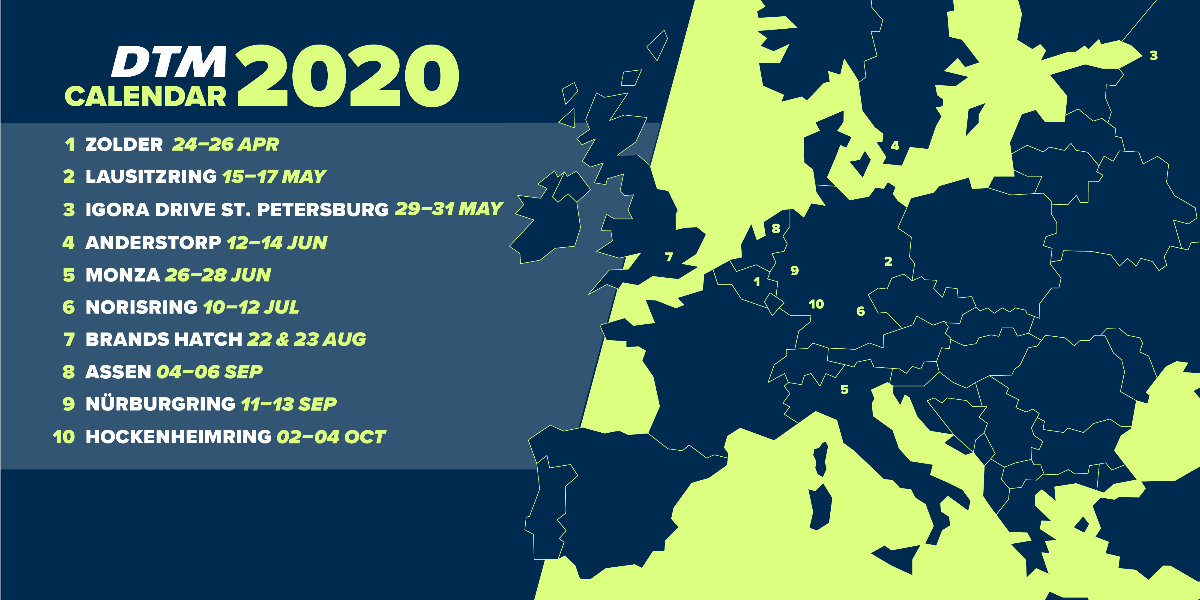 DTM’s 2020 calendar has been completed, following today’s announcement of a race weekend at the brand-new “Igora Drive” track facility near St. Petersburg, in Russia.

Ahead of this weekend’s high-profile seasonal finale at Hockenheim, officials from DTM’s umbrella organisation ITR confirmed the identity of the track that will host the third round of next year’s series, from May 29 to 31, 2020.

Just two weeks ago, ITR announced all dates and nine of the 10 venues on DTM’s 2020 calendar. The contract with the operators of the Russian racetrack was signed by ITR managing director Achim Kostron on Thursday at the grand opening of Igora Drive St. Petersburg.

Next year’s DTM race will be the first international race event held at Igora Drive.

The opening ceremony was attended by, among others, the governor of St. Petersburg, Alexander Beglov, and Alexander Drozdenko, governor of the Leningrad region. More than 100 guests, among them many media representatives from Russia and neighbouring Finland, were also present.

The Igora Drive is located about 80 kilometres north of St. Petersburg, and is situated alongside a large holiday resort. In addition to the modern Grand Prix track facility, the new multi-sport complex includes a motocross and rallycross course, an SUV-site park, a driving safety centre and a kart circuit. The anti-clockwise 4.086-kilometre Grand Prix circuit was designed by the office of world-famous track designer Hermann Tilke, and has eight left- and six right-hand turns.

The DTM’s return to Russia follows a three-year break from the country. The series held eight races at the Moscow Raceway between 2013 and 2017. Next year’s calendar includes four races at classic German racetracks (Norisring, Lausitzring, Nürburgring, Hockenheimring) as well as six race weekends in other European countries: Zolder (BEL), St. Petersburg (RUS), Anderstorp (SWE), Monza (ITA), Brands Hatch (GBR) and Assen (NED).
» Quotes
“We are very happy to have brought the DTM back to Russia after a two-year absence. The Igora Park is a hugely impressive facility, capable of hosting world-class, international motorsport. The track configuration looks set to provide thrilling racing, which will impress spectators in the grandsstands as much as the fans watching on their TVs when we visit next May.”
Achim Kostron, Managing Director ITR GmbH
“Signing the contract on one of the most popular and spectacular racing series in the world is a milestone not only for the ‘Igora Drive’ complex and Saint Petersburg but also for all the motor-racing fans in Russia and worldwide as a great return of DTM to Russia after long three years break. In fact, today we witness history – Saint Petersburg becomes a part of the motor-racing world, the legendary DTM series comes back to Russia and the significant location on the worldwide map of auto-sport and motor racing – the ‘Igora Drive’ complex.”
Vladimir Vasiliev, one of the ideologists of the “Igora Drive” project, multiple champion of cross-country rallies in Russia
“I am very curious about what to expect. The track looks extremely interesting: I’ve already looked at some photos and videos on YouTube in order to get a better idea of what the whole thing will look like. It looks pretty fast in some areas – amd that’s exactly what we drivers always want: fast corners where you need to be brave.”
René Rast, 2019 DTM champion, Audi Sport Team Rosberg
“I’m really looking forward to the race in Russia. For the press conference, I travelled to Russia for the first time ever. It was a cool trip and a great experience. The track looks great, and I can’t wait to aim for victories and trophies there next year.”
Philipp Eng, BMW Team RMR
“The new racetrack near St. Petersburg looks extremely very interesting, a real state-of-the-art facility from Hermann Tilke. The track layout looks quite varied, and should provide exciting racing. The DTM rounds in Russia next year are sure to be one of the highlights of the season.”
Daniel Juncadella, R-Motorsport/Aston Martin