DTM Trophy: a stepping stone into the top league 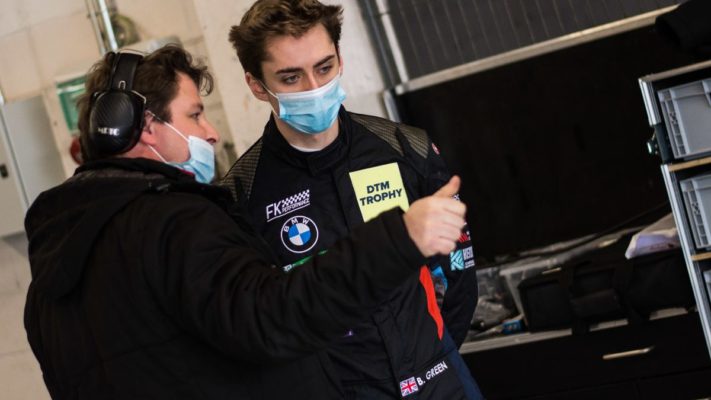 The DTM Trophy is becoming a performance centre for the DTM. In the inaugural season 2020, the top-level junior series has already established itself as a stepping stone into the DTM. The future DTM Trophy champion will not only be rewarded with a sum of 75,000 Euros, but also with an extensive test in a GT3 sports car. The best junior driver of the previous season has also received this support. Briton Ben Green recently completed a successful test with the Audi R8 LMS at the Barcelona Grand Prix circuit. That brought the 23-year-old a considerable step closer towards graduation into the DTM.

“GT3 is an awesome class: really, really fast cars and great racing,” Ben Green leaves no doubt about DTM being his goal in an interview with the dtm.com web portal. “It is a dream I would like to pursue.” He completed over 50 laps in the Audi R8 LMS run by the Team WRT. “In total, I had almost two hours of track time – a great and exciting opportunity and I really enjoyed it.” The Team WRT ranks among the most successful teams in GT3 racing. In the past two seasons, the Belgian outfit also shone in the DTM.

Ben Green started off his career in a classic way in karting. In 2020, he made the step from the British GT Championship to the DTM Trophy. On the first race weekend at Spa-Francorchamps in Belgium, he already scored his maiden victory with the FK Performance Motorsport BMW M4, went on to add another three podium results and ended up fourth from 27 drivers in the final standings. “The DTM Trophy is tough, the racing is really close and excellent as preparation,” Green pointed out. “The step from the production GT sports cars in the DTM Trophy to GT3 is quite an obvious one. It is a step upward in every aspect. More power, better brakes, better aerodynamics, so every aspect has been improved in GT3. That makes the DTM Trophy ideal as a training ground, as preparation to progress into the GT3 class.”

Interesting double programme: DTM teams can educate their own juniors

“With production-based GT sports cars, the DTM Trophy is the perfect second-tier for the DTM. At this professional motorsport stage, drivers as well as teams can present themselves in the best possible way to advance into the top category later,” Frederic Elsner, director event at the DTM organisation ITR, points out.

Next to the young talents, the teams in the DTM in particular benefit as well. “That is one of many advantages of the DTM platform. Teams have the opportunity to educate their own juniors in the DTM Trophy. A double programme is also interesting from a budget perspective as there are many synergies,” Elsner underlines. The DTM Trophy with a total prize fund of 150,000 Euros has two races each during seven DTM rounds, all broadcast live by SPORT1.