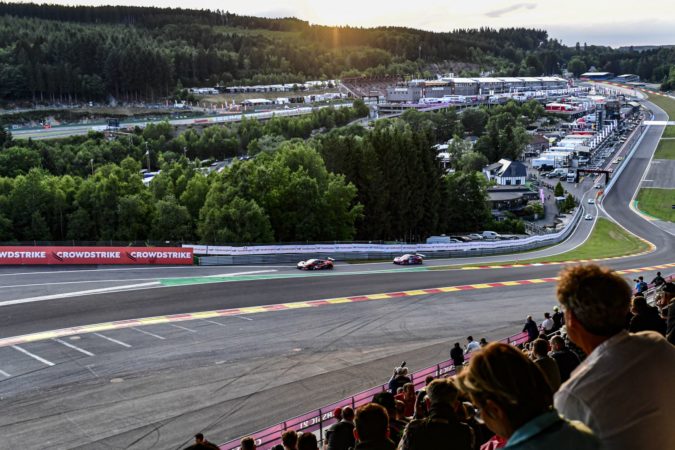 Last year’s overall winner was in dominant form, with the #71 crew of Fuoco/Serra/Rigon beating the #51 of Molina/Calado/Nielsen by 0.178s on average times. The chief architect of this success was Antonio Fuoco, who delivered a 2m16.486s in Q2 to establish a new GT3 era qualifying record.

From this point onwards the #71 Ferrari was clear at the head of the order and secured safe passage thanks to strong runs from Daniel Serra and Davide Rigon. The sister car vaulted into second spot during the fourth and final qualifying segment to complete a perfect day’s work from the Italian squad.

The Iron Lynx cars were followed by the #6 Orange1 K-PAX Racing Lamborghini of Pepper/Caldarelli/Mapelli, who came up 0.317s short on the average. Audi Sport was also on song as its #12 Team Tresor and #32 Team WRT entries took fourth and fifth respectively.

BMW will have a car in the shootout thanks to the #98 ROWE Racing machine, while a third Audi Sport entry also eased into Super Pole thanks to the #66 Team Attempto car. A trio of factory Mercedes-AMG entries completed the top-10, with the #2 GetSpeed finishing ahead of the #88 Akkodis ASP and #55 GruppeM Racing squads respectively.

A further 10 cars will compete in Super Pole. Dinamic Motorsport, Toksport WRT and GPX Martini Racing will represent Porsche, while Emil Frey Racing had all three of its Lamborghini entries among the top-20. Beechdean AMR put Aston Martin in the fight with its #95 Vantage and ensured that seven brands will contest Super Pole. Audi Sport Team Saintéloc, the #30 Team WRT Audi and the #777 Al Manar Racing by HRT Mercedes-AMG also reached tomorrow’s session.

Among those to miss out on Super Pole were the #74 EMA Porsche (22nd), the #46 Audi Sport Team WRT (25th) and the #38 JOTA McLaren (28th). But the biggest upset concerned the #47 KCMG Porsche shared Laurens Vanthoor, Dennis Olsen and Nick Tandy. The latter suffered a brake problem on his first lap in Q3 and was unable to set a time, consigning this extremely strong crew to 64th on the grid.

There were three Silver Cup cars among the top-20, ensuring that the battle for class pole will be decided tomorrow night. The best of them was the #14 Emil Frey Racing Lamborghini of White/Tujala/Lappalainen, which edged the #30 Team WRT crew by 0.019s on the average. The #777 Mercedes-AMG made it through in 20th spot, its place secured by a superb Q4 effort from Fabian Schiller.

Three class pole positions were decided during Qualifying. Barwell Motorsport is the very first Gold Cup pole-sitter after its #77 Lamborghini of Al Harthy/De Haan/MacDowall/Mitchell qualified 29th overall. It was close, however, with a blistering Q4 lap from Lucas Auer putting the #57 Winward Racing Mercedes-AMG firmly in contention. The Austrian’s 2m16.491s was second only to record-breaker Fuoco in the entire qualifying process.
AF Corse will start from Pro-Am pole after its #52 Ferrari qualified 41st on the grid. The crew of Machiels/Costantini/Bertolini/Rovera beat the #24 Herberth Motorsport Porsche by half a second and will start eight places clear of its nearest class rival. SPS automotive performance took first blood in the Bronze Cup battle as its #20 Mercedes-AMG of Kurtz/Pierburg/Müller/Juffali banked 59th overall.

Qualifying was punctuated by two red flags. The first occurred halfway through Q2 when Ralf Bohn went off in the #911 Herberth Motorsport Porsche, ending the German squad’s effort early. No one had set a flying lap when Q3 was stopped by Tyler Cooke crashing the #27 Leipert Motorsport Lamborghini at Raidillon, though the car was not severely damaged and the driver climbed out unaided.

Super Pole will take place tomorrow at 19:00 and will see each crew nominate one driver to complete two flying laps of the 7km circuit. They will run in reserve order to their finishing positions in tonight’s session, with the Iron Lynx squad taking the final two spots in the battle for pole. This will be preceded by a 20-minute Warm-Up, which gets underway at 18:20 and is open to the full field. As ever, live coverage will air in English, German, French and Italian on the GTWorld YouTube channel.