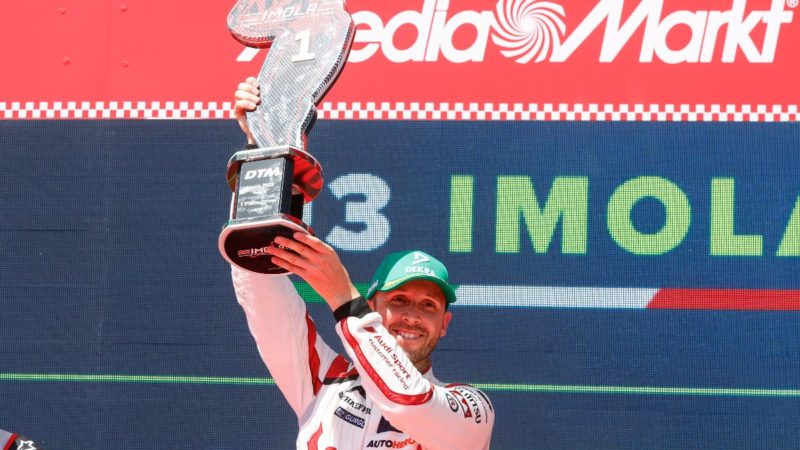 René Rast is definitely back in DTM! After a one-year break in the 2021 season and a first podium finish at Lausitzring, the three-time champion secured his first race win after 587 days at Imola. Back then, in November 2020, the German had cemented his third title win at Hockenheim. In the Italian heat with temperatures well over 30 degrees, the ABT Audi driver kept cool and secured a lights-to-flag victory. Second place went to fellow Audi driver Nico Müller (SUI) from Team Rosberg, Mirko Bortolotti (GRT Lamborghini) finished in third place. Just before the end of the race, the Italian overtook Thomas Preining (AUT), preventing the maiden podium finish for Porsche, the driver and KÜS Team Bernhard in DTM.

Obviously, Rast was overjoyed: “Overwhelming! It simply was a perfect race: the start, the pit stop, the race, everything was smooth. It was very, very hot, you have to fight in the car all the time.” Bortolotti, too, was more than happy: “Absolutely incredible. The strategy of staying out long and then attacking with fresh tyres towards the end worked out perfectly. Huge thanks to the team!”

In the drivers’ standings, Sheldon van der Linde (RSA/Schubert BMW) remains in the lead with 70 points, still having scored four points by finishing second behind Marco Wittmann (GER), the best-placed BMW driver. However, his margin over Bortolotti was reduced to three points. Müller is third in the standings with 58 points, next up is now Rast already who has 49 points to his tally.

The race in scorching heat at Imola required everything from the drivers and their machinery. In the process, Rast managed to stay in front at the start and then to keep it cool in spite of the temperatures. Timo Glock, meanwhile, had bad luck during his DTM comeback: the guest driver from the Ceccato Racing BMW team had to park his damaged BMW M4 following contact on the opening lap for which he wasn’t at fault.

As the race went on, it was Bortolotti who caught the attention in particular. Due to a grid penalty, the GRT driver was forced to start from 16th place, put in a strong recovery drive with a perfect strategy and overtaking manoeuvres without compromise, securing the podium finish for Lamborghini as a result. For Ferrari, things went less well in the home race: Nick Cassidy (NZL) came 14th with the AlphaTauri AF Corse car, Felipe Fraga (BRA) retired with the Red Bull AF Corse entry. The best-placed Mercedes-AMG driver was Maro Engel for the GruppeM team, who still scored one point for finishing tenth.

However, there already is a chance to score a better result on Sunday (1.30pm) when the sixth of the total of 16 races in the 2022 DTM season will be held at Imola.