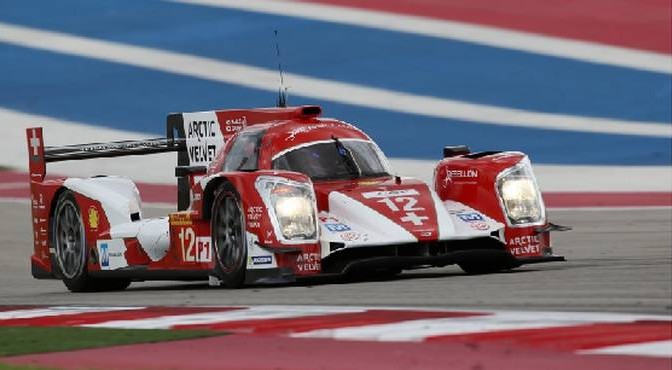 FOURTH 2014 VICTORY IN A ROW FOR REBELLION R-ONE #12 IN AUSTIN
Nicolas Prost, Nick Heidfeld and Mathias Beche in the Rebellion R-One Toyota #12 secured a 7th place overall finish at the FIA WEC 6 Hours of COTA.
The three drivers claimed the victory in the LMP1-L category for the fourth time in a row this season after a race full of dramas.

Starting from the back of the grid after a drive-by-wire throttle issue during the qualifying session, Mathias Beche in the Rebellion R-One Toyota #12 found his way through the traffic to became P8 after only five laps, with the sister car #13 driven by Fabio Leimer just in front in P7. From that point a nice battle started between the two Swiss cars for the lead in LMP1-L class.
Nicolas Prost took over from Mathias and continued the battle with Dominik Kraihamer in car #13.
During the 50th lap, one hour and a half after the start, the race was stopped by a red flag due to heavy rain falling on the track and causing off track incidents for many competitors including some of the race leaders. Both Rebellion Racing’s drivers managed to keep their cars on the track despite pouring rain and very low visibility.
One hour later, the race was resumed under the safety car. The green light was given to the cars just before the 3 hour mark and the battle between #12 and #13 resumed.

Two hours before the end of the race, Fabio Leimer lost the front of the car in turn 11, slid on the wet grass and was unable to avoid crashing into the barriers on the front and rear left of the car. He managed to drive the car back to the pits, but the Rebellion R-One Toyota #13 couldn’t be fixed in time and had to retire.

From that point the Rebellion R-One Toyota #12 drivers moved to a calmer strategy and took the chequered flag in 7th position overall, first LMP1-L.

With this fourth win of the season, REBELLION Racing scored enough points to secure a third win in a row in the FIA WEC Endurance Trophy for private LMP1 Teams after their previous wins in 2012 and 2013.

In the FIA World Endurance driversí championship, Nick Heidfeld, Nicolas Prost and Mathias Beche have strengthened their fourth place in front of factory drivers from Porsche and Toyota.

The next round of the FIA World Endurance Championship will take place in Japan for the 6 Hours of Fuji on Sunday 12th of October.

Mathias Beche – Rebellion R-OneToyota #12 :
” It was a tough race. We had a problem in qualifying, so we had to start from the back of the grid. I pushed very hard. My target was to double stint the tyres, but actually the main problem was not the tyres but the heat in the car. I was really, really hot so we had to single stint. It was a hot race but at the end we’ve got the win and I’m happy with that. “

Nicolas Prost – Rebellion R-OneToyota #12 :
” We look quite competitive but we expected to be closer to the factory cars. Now we have the Lotus to fight with in the LMP1-L class, and the comparison between the car will help the ACO to adapt the regulations between LMP1-H and LMP1-L cars. Rebellion Racing did a great job with the R-One car and I hope the ACO will help us in the future. For now, I’m pleased with the win today and I think that with the points we scored today no one will be able to catch us for the championship. “

Nick Heidfeld – Rebellion R-OneToyota #12 :
” It has been a very strange race. As we had a good car, I would expect more competition. Mathias did a very good job. The sister car was very fast but after the first stint, Mathias pushed to be very close to it. When rain came, we managed to keep the car on the track. We have been lucky after the safety car to be in front of the #13, one lap behind due to its pit stop. When the #13 car crashed out, we had no more competition and the interest of the race was lower. I just tried to drive as safely as I could to finish the race. I hope than in Fuji we could have a longer battle. “

Fabio Leimer – Rebellion R-OneToyota #13 :
” I went out in the double straight of the track. The car was in the curve when I suddenly lost the front. I slid on the grass and crashed into the wall heavily with the left front and rear of the car. I could get back to the pit, but the rear was too damaged to be fixed in time. I’m really disappointed not to see the chequered flag because we really wanted to go through the race with a podium at the end. “

Dominik Kraihamer – Rebellion R-OneToyota #13 :
” With the terrible heat and the heavy rain, it was hard to drive today. Before the qualifying session, we found a good balance for the car, but some brake issues made the car difficult to drive. I have been frightened several times and had to push really hard to follow Nico’s pace. But we had good battles with the #12 car and it’s promising for the next races. “

Andrea Belicchi – Rebellion R-OneToyota #13 :
” It’s a shame that we had to retire because we were quite good. For sure we were in good position to fight with the #12 until the rain. But the safey car was deployed and we broke the car. I’m sure that the step of improvement we get this weekend will help us for the next races of the season. “

Bart Hayden – Team manager REBELLION Racing :
” We’re obviously delighted that car #12 secured its fourth straight win in LMP1-L this season, but at the same time very disappointed that car #13 couldnít be repaired in time after the crash. But, all the drivers got plenty of track time this weekend and after the long break of the summer, we have re-focussed together as a team. We are already looking forward to Fuji where we will be looking to further improve the performance of our cars.”