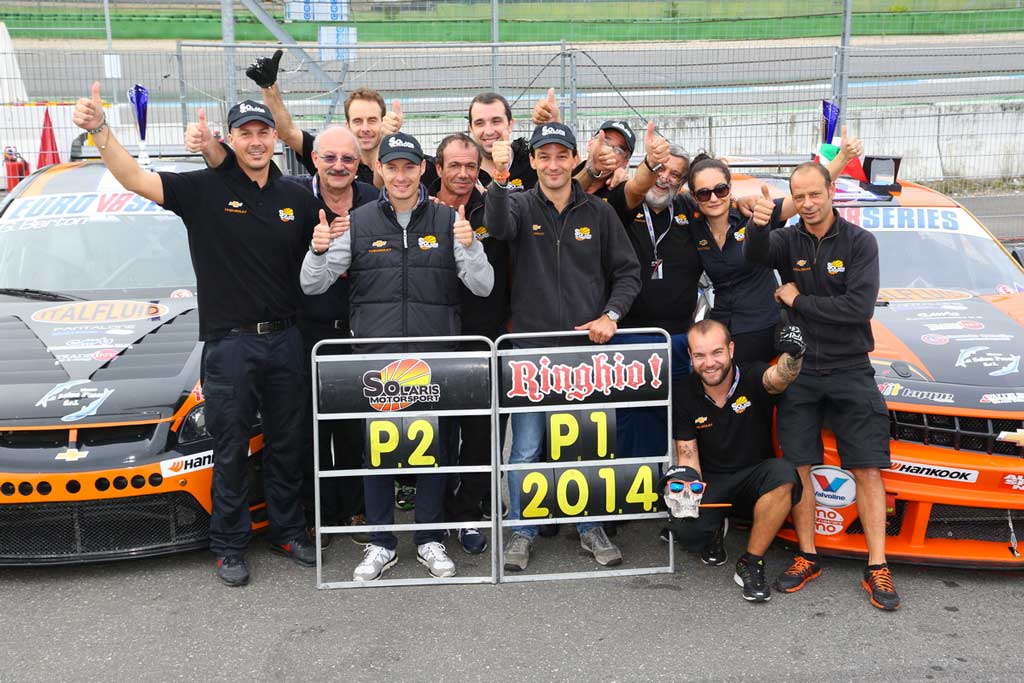 From the ground up in just two years. Francesco Sini celebrated the EUROV8SERIES title at Hockenheim, finally bringing his Chevrolet Camaro to glory. The project of bringing the American muscle-car to the FG Group championship started at the end of 2012 and went on-track for the first time at the beginning of the 2013 season.

“It’s been a race against time – said the Abruzzo-based man – Last year we paid the price of some teething problems. But during this winter we worked with a passion to develop the car, and the results eventually came”.

With three wins at Vallelunga, Brno and Hockenheim, in addition to many top-5 results, enabled Sini to take the crown in the last round of the season held in Germany. At the end of an hard-fought challenge, he beat the Audi RS5 of Tomas Kostka and the Mercedes C63 AMG Coupé of Nicola Baldan.

“Without the double zero at Mugello, when I had a radiator problem in Race 1 before ending up in a a crash due to a contact with the BMW of Maurizio Copetti, I would have probably lined-up at Hockenheim as the leader. In the end though, the events took a different turn and I had to struggle a little more. But that also makes it even more special.

We asked Sini what was the key moment, when he started to think that it was done.

“With two laps to go, the team told me on the radio that Romanini had passed Kostka. At that point, I realized that there was nothing more to fear. It has been the two longest laps of my career. Maybe it was just a case, but helping me to win the championship it was a driver from CAAL Racing, the same team that made me debut in SUPERSTARS”.

It’s been the fourth year for Sini in the series promoted by Maurizio Flammini. And now?

“Now I aim to be back for 2015. The series is exciting and I’m convinced that it can continue to have an high-level field. And we’re preparing from this moment on. The goal for next year is to bring on-track two Camaro models and hand the two Luminas to a satellite operation. Speaking of Luminas, I want to thank my team-mates, as they showed some great potential. Mimmo Schiattarella ended up on the podium in every race he entered, while Giovanni Berton was the second-placed driver behind me among the 2-wheel-drive cars both at Sachsenring and Hockenheim. Once again, he proved extremely quick.

Now, the Solaris Motorsport is already working to prepare for the new season. The second Camaro is ready and Sini is hungry for more wins.