Germany vs England: prestigious duel in DTM Trophy as well 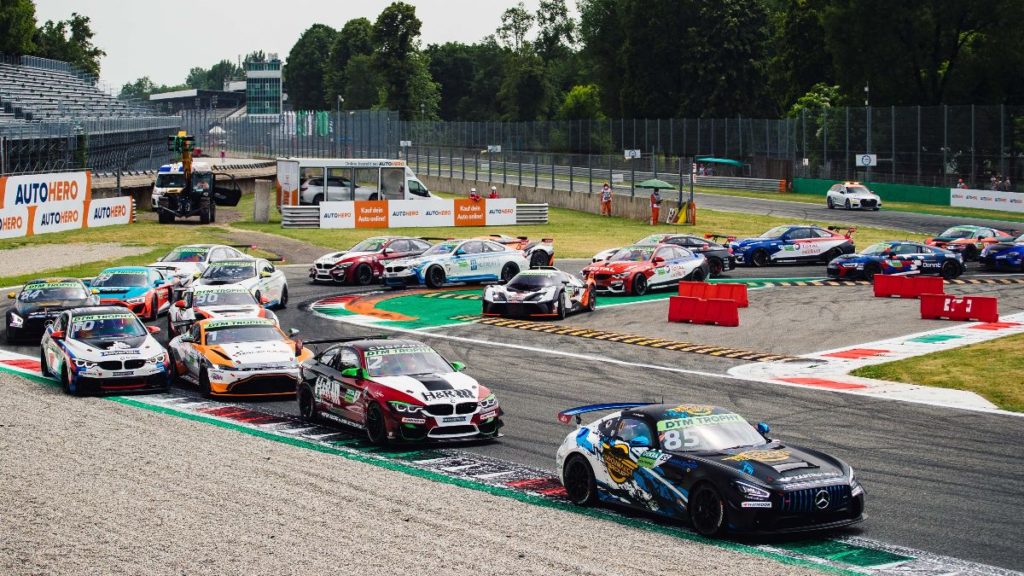 In the recent Euro 2020 football competition, England came out on top against Germany in the round of 16. The prestigious duel continues in the DTM Trophy. Prior to the second race weekend (23-25 July) of the junior race series, the two countries are tied 1-1 in terms of victories, but it is a Brit who is the points’ leader coming to DEKRA Lausitzring: William Tregurtha. The 21-year-old from Bedford is convinced: “It wil be fast, really fast”. After all, the DTM Trophy, just like DTM itself and all the other support series, will be racing on the revised track lay-out including Turn 1, the 300 metres long banked first corner. Tregurtha also has another reason to look forward to the weekend at Lausitz because finally, spectators are admitted into the grandstands again.

Only just before the season opener at Monza, William Tregurtha was confirmed as a driver by the CV Performance Group from Niederzissen. To the surprise of many, he claimed a win, a second place and a pole position. “Actually, it wasn’t that big a surprise for me because we were extremely well prepared,” says the young Brit, who had already put in a good performance in pre-season testing at Lausitzring. “Admittedly, the team is coming from karting and is new to car racing, but my race engineer and my chief mechanic have vast experience with these GT sports cars.” For William Tregurtha, good preparation is key. “In my opinion, optimal preparation is really important, especially with sim racing and on-board videos. I have raced at Lausitzring already and I like the track. I have already been on the podium there, too,” says Tregurtha. Concerning Turn 1, he adds: “I love ovals, I frequently watch NASCAR races as well. You have to be careful, though, because the weekend can be over really quickly when you end up in the wall.” The Brit is a rookie in the DTM Trophy, but is already full of enthusiasm: “It is the first time in six years that I have a car all for myself. That is just beautiful. Moreover, I get to learn new race tracks and can watch DTM from up close, which is great!”

Home round for Sophie Hofmann: Audi driver looking forward to the first laps through Turn 1

While William Tregurtha is aiming at victory and at least wants to finish on the podium again, Michael Schrey (GER, Hofor Racing by Bonk Motorsport) and his fellow BMW driver Ben Green (GBR, FK Performance Motorsport) split the victories between them at Monza. Tregurtha or Green, the best junior driver in 2020, or Schrey, or Aston Martin driver Tim Heinemann (GER, PROsport Racing): a four-way battle at an equal level. Defending champion Heinemann was first across the finish line at Monza on Sunday but was classified third following a time penalty.

During pre-season testing at Lausitzring, Moritz Löhner (GER) already made his mark. At Monza, the sim racer and the winner of the 2020 DTM Esports Championship powered by MediaMarkt convinced by finishing third in the first race with the BMW run by FK Performance Motorsport. In the drivers’ standings, he is currently fourth (19 points) behind Tregurtha (40), Schrey (37) and Green (25).

The Lausitzring, with a length of 4.562 kilometres in the configuration with the banked first corner, is a home round for Sophie Hofmann. The 23-year-old, who is racing an Audi run by Heide-Motorsport, is at home in Waldenburg in Saxony, a city known for its pottery tradition. “I am looking forward to the Lausitzring. Because of the proximity, some sponsoring partners and friends will be coming over to support me,” says Sophie Hofmann, who managed to keep here fellow female drivers Stéphane Kox (NED, Ring-Racing, Toyota) and Laura Kraihamer (AUT, True Racing by Reiter Engineering, KTM) at bay in the Sunday race at Monza. “I am very curious about first practice on Friday morning when we will be driving in Turn 1 for the first time. That will be a new experience because we were driving at a different track configuration in testing.”

In the third and fourth race of the season, starting both on Saturday and Sunday at 3.10pm and broadcast live on SPORT1 and via the streaming platform DTM Grid , 22 production-based GT sports cars from seven different manufacturers will be on the grid.