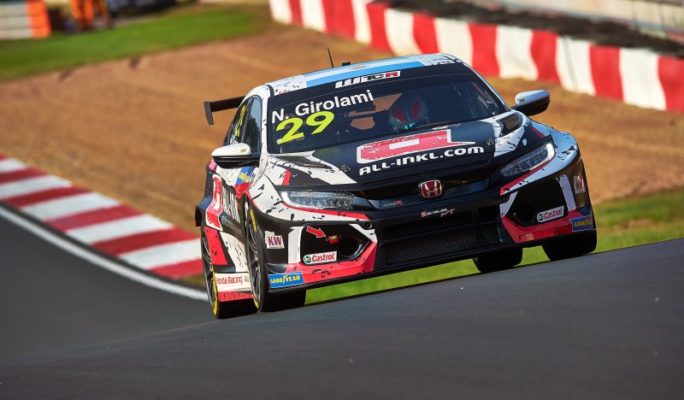 The ALL-INKL.COM Münnich Motorsport driver – who was fastest in Friday’s opening practice session at the Belgian circuit, a late addition to the 2020 calendar – ended Q2 10th in his Honda Civic Type R TCR, putting him at the head of the field for the partially-reversed grid race one.

‘Bebu’ edged team-mate and Argentinian compatriot Esteban Guerrieri for the final place in the top 10 in Q2, with last year’s WTCR runner-up due to start both Sunday races from 11th as a result.

Esteban lost time at the start of his final Q2 effort when the car directly in front of him kicked up dust at the first corner and, despite clawing back that time loss over the remainder of his lap, he was not able to improve his position.

ALL-INKL.DE Münnich Motorsport driver Attila Tassi was fastest of all the JAS Motorsport-built Honda Civic Type R TCRs, and within half a tenth of a place in the Q3 pole position shootout with his best effort in Q2.

In the end Attila ended up seventh; his best qualifying since he claimed pole position in Vila Real last year, a result that will also put him within striking range of the podium positions from fourth on the grid for race one.

Tiago Monteiro will start both races from 18th, though that position bears no representation of his real pace.

After his first Q1 attempt was ruined when gravel was dragged onto the track, Tiago looked set to improve into the top 12 positions required to make it through to Q2 – only for a full-course yellow to nullify not one but two laps.

There was one final frustration to come as, having set a personal best first sector on his final effort, he came across a slower car at the end of his lap, which prevented him from improving his time.

“Having the reversed-grid pole gives us a strong opportunity to start the season by scoring good points. We cannot be fully satisfied with the result, we want to be fighting for outright pole, but unfortunately this was the maximum today. Even though we were first in practice yesterday we knew that maybe the others were saving some speed, and today we have seen that. But it’s good that all of the ALL-INKL.COM and ALL-INKL.DE Münnich Motorsport Honda Civic Type R TCRs are within one or two tenths of pace. I want to congratulate all members of the team for their support; we put four new cars on track on Thursday without rolling out and there have been almost no issues. We know that we have to improve, but let’s see how the weekend goes with the opportunity we have.”
– ALL-INKL.COM Münnich Motorsport

“I think a bit more potential was there. I couldn’t maximise my lap in Q2; my first one was not great, and on the second one I had a car in front of me which ran wide at Turn 1 – he clipped the apex in the inside of the corner and put dust on the line. I lost a tenth and a half there and I had to make it up around the rest of the track, which I did, but it was a bit of a setback. Our potential isn’t to be quickest – it looks like other brands are faster this weekend – but I think it could have been better. It’s time to reset and get ready for the races tomorrow, and try to score as big a points haul as possible.”
– ALL-INKL.COM Münnich Motorsport

“To be the top Honda is a positive thing, but to miss out by only half a tenth on Q3 is a pity. To be honest, my lap was pretty much all I could extract from the car. Maybe I could find one tenth, but that would be the absolute perfect lap. The gap to first – four, four and a half tenths – is impossible to bridge. We tried to get the maximum out of the car and I think it worked out quite well, so I’m pretty happy with today’s work. Tomorrow there are two races in the middle of the pack, one with a good chance at a podium, so hopefully there are some very good and fair fights to come.”
– ALL-INKL.DE Münnich Motorsport

“That was a shame as we had plenty more pace in the car, but nothing seemed to go right. The first attempt was ruined by some gravel on the track; the second was a good one and should have been good enough for Q2, but of course the full-course yellow put paid to that and the following lap. I slowed down, went for it again and once more there were easily four or five tenths in the car to improve by, but then I was blocked in the final braking zone by another car. It was a little bit ridiculous as it cost me a place in Q2, but that’s how it is.”
– ALL-INKL.DE Münnich Motorsport

“Not the qualifying we expected for the season opener. We had a good preparation for the season, but we were not able to test here before because this was a last-minute change. But all the boys from ALL-INKL.COM and ALL-INKL.DE Münnich Motorsport did a good job to improve the cars between the sessions, and to prepare the cars in the best way, change the tyres quickly to give the drivers a second run in Q2. So well done to the mechanics for an excellent job; now we will check the data to see where we can improve for the races.”
– ALL-INKL.COM Münnich Motorsport

“It’s been a hard start for everybody, just to get over the mountain and be here. I think Münnich Motorsport have shown a very good attitude to what they’re doing with four cars, because moving from two cars to four cars is a big step. So I think that it’s been very good work, the cars are prepared well, it’s now that there is a little bit of an uphill – qualifying was maybe not as good as it should have been but still we have a car on the reversed-grid pole, and Attila did a good job too. I feel sorry for Tiago that he missed his fast lap. Overall it’s a solid start, and it’s something that we can start to build on – so let’s see what happens in the races tomorrow and go from there.”
– JAS Motorsport