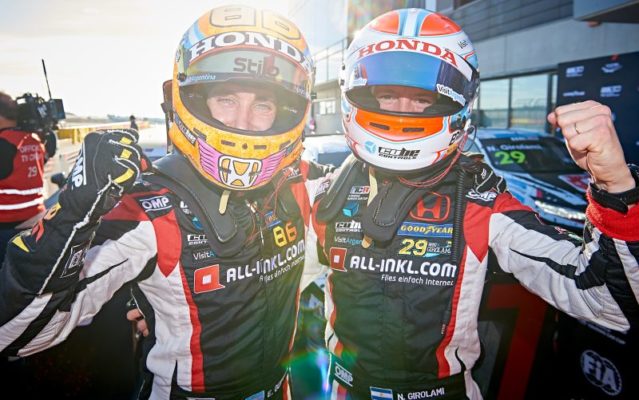 Esteban Guerrieri capped another strong WTCR – FIA World Touring Car Cup campaign with a stunning victory during the final round of the season at Motorland Aragon.

After a tough qualifying session, Münnich Motorsport started the final raceday of 2020 knowing a reversal of fortunes would be required to prolong Esteban’s title challenge.

They got just that, as an inspired strategy call made jointly by the team and drivers led to a perfect 1-2 finish for the ALL-INKL.COM Münnich Motorsport side of the garage.

While most started on full slicks on a damp surface, the Civic Type R TCRs of Esteban, Nestor Girolami and Tiago Monteiro all went for wet rear tyres – a decision influenced in part by their experience of how long the circuit had taken to dry during a pre-season test.

That paid dividends, as Nestor raced into the top three from 11th on the grid at the start, taking the lead before the end of the first lap as he romped clear of the chasing pack early on.

Esteban was delayed off the line but proved the wisdom behind the tyre strategy by climbing to seventh before the end of the first lap, and quickly picked his way through the cars ahead to move into second.

He gradually chipped away at his team-mate’s lead, which stood at six seconds at the start of the final lap, before ‘Bebu’ magnanimously allowed Esteban through to claim maximum points.

That extended Esteban’s title hopes into the penultimate race of the season, but in a cruel twist of fate his challenge came to an early end in race two when he and another car, which had slowed in the acceleration zone off the Turn 16 hairpin, made unavoidable contact, causing significant front-end damage to his Civic Type R TCR.

The race result put the 2020 title beyond Esteban’s reach, but repairs between races two and three ensured he made it out for the finale. Esteban finished 10th on the road, which should have secured third place overall, but a post-race penalty dropped him out of the points and into fourth in the standings.

Esteban’s race one success nevertheless brought the JAS Motorsport-built Civic Type R TCR’s tally for the season to five wins from 16 races, while his four victories matched his haul from the 30-race 2019 season, and means he is the first driver to have scored 10 wins in the WTCR.

The 1-2 finish also helped ALL-INKL.COM Münnich Motorsport secure its best result to date in the Teams’ championship, finishing runner-up after placing third in 2018 and 2019.

Nestor’s second place in race one was his fourth visit to the podium of the season, and helped him to a top-10 finish overall for a second year in a row.

As has been the case throughout the two race weekends in Spain, the Argentinian also made an excellent start in race two and gained four places on the opening lap – muscling ahead of the points leader – before a mid-pack squabble on lap two cost him ground.

He fought his way into seventh and was hunting down the pack ahead when he picked up radiator damage that led to an engine issue three laps from the finish, which marked the end of his race and his season.

It was a cruel early finish to a solid second campaign for the Argentinian, whose 10th place in the final standings was not indicative of his pace across the season.

Tiago Monteiro had been due to finish race one in eighth, if not better, until he pulled up on the penultimate lap with a wheel issue.

He bounced back in the second and third races, though, concluding a season in which he maintained his run of scoring a podium in every full year of World Touring Car competition with 10th and 12th-place finishes.

Though his was the only Civic Type R TCR not to use wet tyres in race one, the Hungarian still drove well through the pack – rising 10 places to finish 10th.

His best result came in race two, taking eighth, though he was on course for a seventh-place finish in the finale before ceding position to Esteban.

Attila and Tiago finished 12th and 15th respectively in the Drivers’ standings, with ALL-INKL.DE Münnich Motorsport sixth in the Teams’ points.

“We got a little bit of all the emotions of motorsport today, it was definitely bittersweet. We went from a magic race at the beginning to a crash that compromised the rest of the day. It was impossible to avoid that contact, but it made the car slow for race three despite the guys doing what they could. In such a short year, the big challenge was to find consistency. I think we found a good level, which was necessary to be able to win and stay in contention for the title, but our rivals probably did a little bit better, so congratulations to them for the championships. Still, I’m thankful to everyone at ALL-INKL.COM Münnich Motorsport for their hard work and the way we used the tools at our disposal. My fighting spirit is still always there, so I’m pleased in the end; obviously it wasn’t the best way to finish, but this is part of sport sometimes.”
– ALL-INKL.COM Münnich Motorsport

“It was definitely a day of two halves to end the season on. Race one was really good; we took a really bold decision to go for wet rear tyres, but it made all the difference, as I managed to get up to third in the opening corners then lead before the end of the lap. It was a nice surprise because barely anybody else had taken the decision, so I’m so glad we could score this result for the team and give Esteban a hand in the title fight. In the drier conditions unfortunately we weren’t at the same level, but I was still running in seventh in race two and happy with my pace until I had an issue, which ended my season. But we did our maximum on the day and we have a great 1-2 to look back on. We’ll try to learn as much as possible from what was an incredibly short season and come back stronger in 2021.”
– ALL-INKL.COM Münnich Motorsport

“The main thing today was to try everything we could to give Esteban his championship title, but unfortunately it didn’t work out. It’s been a season of ups and downs, with some very good moments and also some very tough ones – we had a bit of everything. Overall, though, I’m pleased with our work and the way we have evolved over these past couple of months of racing. Maybe it doesn’t reflect in the final result, but we did evolve during the season and I think we are more united as a team, so I’m looking forward to the future. We learned a lot over the course of the season despite such a tight schedule, so hopefully we can put this into practice. Well done to everyone at the team for getting through the season, and to Yann [Ehrlacher] for the title. Hopefully we’ll have our revenge next year.”
– ALL-INKL.DE Münnich Motorsport

“In race one I was the only one of the four of us on full slicks, but compared to the others on the same tyre strategy as me my pace was really good, so I was happy to come away with that top 10. My pace in race two felt good as well, but race three was probably the pick of the lot. I had an amazing start and first couple of laps, I was pushing really hard. I tried to maintain that pace but I had probably pushed the tyres a little too much, so I found it more difficult to keep touch with the top six. Then on the final lap I got the call to lift to let Esteban by – I’m happy to have played my part in achieving the best result possible for the team. Overall I’m happy with my season; I feel like I improved by a good step and learned a lot, which I hope to continue into next season.”
– ALL-INKL.DE Münnich Motorsport

“Obviously today was a bit of an anticlimax considering the way Esteban’s title hopes ended, but our efforts showed what a great team spirit and unity we have in the ALL-INKL.COM Münnich Motorsport camp, whether that was Esteban’s team-mates supporting him on-track or the work of the mechanics, who repaired his car in no time in order to get him out for race three. The guys have worked so hard during a really short but intense season, so this morning’s mega 1-2 for Esteban and Nestor, and finishing second in the Teams’ championship, is a nice reward for their efforts. Congratulations must go to Yann as well, who we know well from the 2018 season and who is a deserving champion.”
– Münnich Motorsport

“Although the final race weekend of the season was one of mixed fortunes, we can be proud once again of the efforts of all four drivers and everyone at Münnich Motorsport, who showed what a great spirit there is among the team. To finish the season with a fifth victory for the Honda Civic Type R TCR is a fantastic achievement, particularly with such a short calendar. It has been a strange year, but there are plenty of highlights to celebrate from a short season, and we hope for more of the same to come in 2021.”
– JAS Motorsport