British ace finishes fifth after leading majority of the race 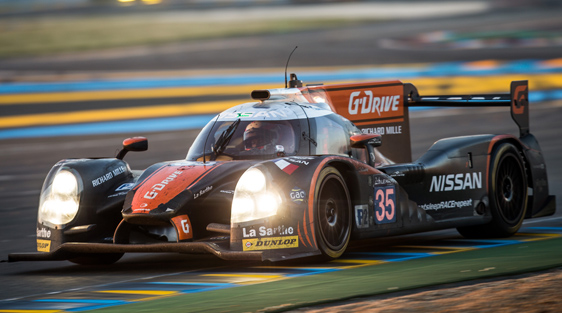 Alex Brundle’s bid for LMP2 class victory at this year’s Le Mans 24 Hours ended in bitter disappointment earlier today when a spark plug problem cost the King’s Lynn resident’s G-Drive Racing by OAK Racing squad a likely win.
The #35 Ligier JS P2 Nissan he shared with Jann Mardenborough and Mark Shulzhitskiy dominated its class at the world’s greatest endurance race but was denied a well deserved win on its competitive debut as a result of an engine gremlin that first materialised at 10am local time this morning.
Such was Brundle’s advantage that he was able to hold on to the class lead for another three hours before the limping Ligier was finally overhauled by the chasing pack with just 110 minutes remaining. It eventually came home fifth.
Brundle first climbed aboard after 90 minutes on Saturday but was immediately called back to the pits for wet weather tyres when two separate short, sharp showers doused the Circuit de la Sarthe. Such were the extreme conditions that the Safety Car’s intervention was required on both occasions.
Despite encountering tricky track conditions, the 23-year-old immediately set about chasing down the class leaders once racing resumed and eventually took top-spot in class after four-and-a-half hours. Indeed, the car’s advantage was over 20 seconds by the time Brundle completed his triple stint 45 minutes later.
He was back aboard just before 1am for the first of two quick and consistent quadruple stints through the night, during which he set the car’s fastest time and helped establish its lead of more than one lap.
But the crew’s hard work began to unravel at mid-morning on Sunday when Mardenborough was forced to make an unscheduled stop. Nine minutes spent in the garage to replace a cracked brake disc and diagnose the engine problem allowed TDS Racing’s Ligier to take the lead, before suffering reliability problems of its own.
That saw Brundle back out front, albeit lapping at much reduced speed due to the engine issue, before the LMP2 field eventually and inevitably took advantage.
His performance didn’t go unnoticed though, with respected Radio Le Mans analyst Paul Truswell nominating the crew for the station’s annual Robin Goodman Spirit of the Race Award.
“We’re gutted, to be honest, but that’s Le Mans for you,” said Brundle. “We were out front controlling the race and had a handy advantage, which is why we were still in contention after the engine problem struck this morning. But from then on we knew it would be incredibly difficult to hold on. The car was 30km/h slower in a straight line and losing about 10 seconds per lap to our rivals, so although it took them a while to close in it was inevitable in the end.
“But I really want to congratulate and thank everyone in the team and at Onroak Automotive who have put together an absolutely brilliant car. We completed a lot of test mileage beforehand but to come here with the brand new Ligier chassis for its first race and have so few issues is testament to the hard work back at base. Jann and Mark were also fantastic and together we made a great team. We might have been the youngest driver crew here but that didn’t stop us from showing what we’re capable of against a very experienced and competitive LMP2 field.”
Despite the obvious disappointment, Brundle will quickly regroup ahead of his next competitive outing with OAK Racing’s Morgan-Nissan LM P2 in the upcoming Tudor United SportsCar Championship round at Watkins Glen on June 27-29.
il 1 Giugno 2014   /   24 Hours le Mans, Pista