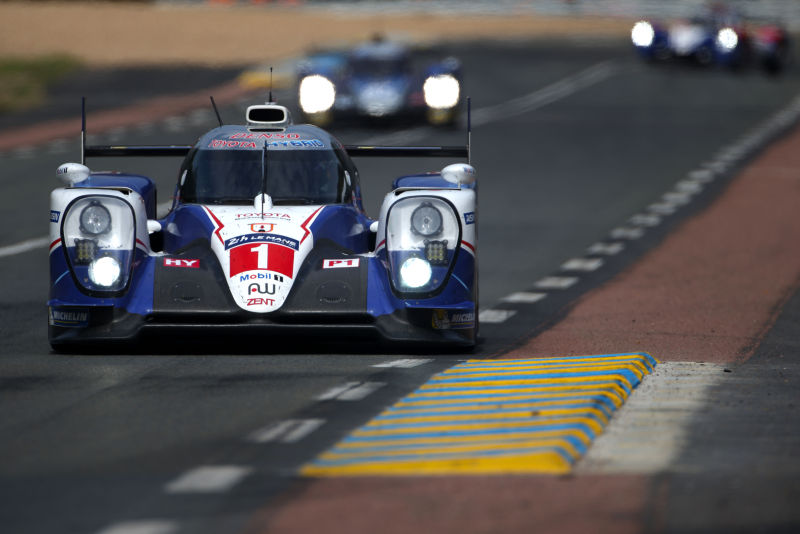 TOYOTA congratulates Porsche on a hard-fought and impressive victory after the #19 beat its sister #17 car to the win. The Audi #7 was third.

Having targeted Le Mans this year, TOYOTA GAZOO Racing leaves La Sarthe frustrated but determined to improve in all areas after a result which was far away from the team’s pre-season expectation.

The two TS040 HYBRIDs ran consistently and reliably but fell short of the pace of their rivals. An improvement of one second in terms of fastest race lap compared to 2014 was not enough to challenge and led to a solitary race for both cars.

Only one incident of major significance affected the team and that occurred in the fifth hour, when Anthony Davidson clashed with a GT car, damaging the front right corner. That caused handling problems and a further accident followed soon after.

Quick work by the pit crew ensured replacement front and rear bodywork, plus new left rear suspension, was fitted, with the #1 losing 13 minutes and rejoining five laps behind the leader.

Otherwise the team experienced a frustrating race which saw the TS040 HYBRIDs unable to challenge the leading cars whilst also under no immediate threat from behind.

Twenty hours of dry weather limited the strategic opportunities and put the emphasis on consistent, reliable running and pit operations. Despite the physical demands of a 24-hour race, the pit crew performed impeccably.

Light rain did begin to fall inside the 21st hour and continued sporadically but it was never enough to have a significant outcome on the race.

There was a late position change for the #2 car when it moved up to sixth place due to technical problems for the #9 Audi. Alex and Sébastien took the chequered flag with both cars exceeding TOYOTA’s previous record distance at La Sarthe.

TOYOTA GAZOO Racing will now return to base with determination to improve and be back at Le Mans stronger and more competitive in 2016. Before then, there are five WEC races remaining, beginning at the Nürburgring on 30 August.

Toshio Sato, Team President: “Congratulations to the Porsche team who performed very well and can be proud of their achievement. Ultimately our car was not fast enough at Le Mans this year to fight for the podium. We reduced the gap to the opposition compared to qualifying but we were not able to fight, which is disappointing. We cannot be happy with this result, but I am satisfied with the professional work and dedication of the team. It has been a hard journey, but we never gave up. Aside from the contact for the #1 car early in the race, we made no mistakes and the cars ran well. Now we start preparation for Le Mans 2016 when we want TOYOTA to return much stronger.”

Anthony Davidson: “It’s obviously disappointing not to make the podium this season at Le Mans. We were up against strong competition and we knew it would be harder this year but it’s proven to be much more difficult than we imagined. We have to stick together, push together and come back stronger. I am immediately thinking about next year’s Le Mans. I will put this one aside and look forward.”

Sébastien Buemi: “I am obviously disappointed with the result and the race as a whole. We had great reliability with no technical issues and the team did a great job in the pit stops, as well as getting the car on track again after the accident. In the end I think we finished where we deserved to, based on our pace. Congratulations to Porsche, they deserved their win.”

Kazuki Nakajima: “It was a hard race for us. This race is always very difficult but it’s tough to see Porsche making it look it easy. We did our race and the set-up of the car was very good, we were just missing some speed. The mentality of the team was very strong and we fought to the end; that was quite positive. I hope this hard time will be the kick-off point for next year. We have to push hard.”

Alex Wurz: “We had a race without problems; we only stopped for fuel and tyres but we were several laps down so we have clear homework to do. The direction in which we have to improve is also clear and we have a whole year to do that. Overall I am disappointed but looking specifically at our race on #2, it was okay; we controlled everything once we saw the position we were in and it worked well.”

Stéphane Sarrazin: “It was really a difficult race for all of us, the whole team. We didn’t have the pace so we know what we have to improve. We showed that the car is very reliable; we had no issue with both cars and our crew performed really well so these are the positive points. Well done to Porsche and Audi, they did a brilliant job and that gives us a lot of motivation to come back next year aiming for the top.”

Mike Conway: “It was my first Le Mans in LMP1 and with TOYOTA. I learned a lot. We just hung in there and tried to make no mistakes. We were in our own race really. We kept pushing, then towards the end the third Audi came into play. That was more exciting because we had to push hard to keep a good gap. At the same time Kazuki was in front of me, so it made it interesting to battle a bit with lap times. Congratulations to Porsche for their achievement.”