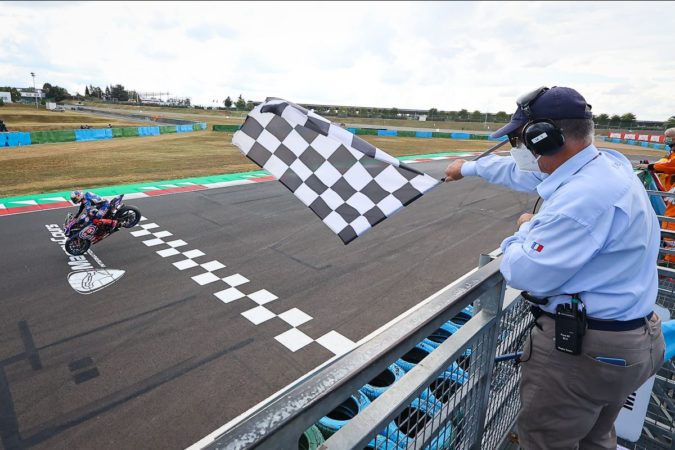 Dramatic racing, incredible battles and more featured throughout Race 1 at the French Round
The first race of the MOTUL FIM Superbike World Championship at the Circuit de Nevers Magny-Cours delivered action throughout the 21-lap encounter with Toprak Razgatlioglu (Pata Yamaha with Brixx WorldSBK) taking victory with an incredible performance of pace and consistency to win by more than four seconds as he gained a five-point swing over nearest rival Jonathan Rea (Kawasaki Racing Team WorldSBK) at the Motul French Round, while title rival Scott Redding (Aruba.it Racing – Ducati) endured a difficult Saturday in France as he finished 12th in Race 1.

Razgatlioglu got a good start and took the lead through Turn 1 but soon found himself shuffled back thanks to the run down to the Turn 5 hairpin of Adelaide. He responded when Rea took the lead and made a move on Lap 4 at Adelaide to reclaim the lead of the race before he was able to pull out enough of a gap to keep Rea at arm’s length.

Rea was able to respond as the laps progressed, closing the gap to just a couple of tenths but could not make a move stick before Razgatlioglu extended his lead out in front to more than a second ahead of Rea, holding on to secure his second victory in a row following on from his win in Race 2 at Navarra. Rea’s second place extends his winless drought to seven races since he won at Assen in Race 2. Razgatlioglu showed remarkable consistent pace throughout the 21-lap encounter, always lapping in the 1’37s bracket and he also becomes the first Yamaha rider to take 18 podiums in a single season.

Andrea Locatelli (Pata Yamaha with Brixx WorldSBK) claimed his third podium in WorldSBK with third place after he got a good start to the race to move up the field from fifth place, before battling the even faster-starting Michael Ruben Rinaldi (Aruba.it Racing – Ducati) for fourth place; eventually passing the Italian at Turn 5 on Lap 12. He then gained a position on Lap 17 when Alex Lowes (Kawasaki Racing Team WorldSBK) crashed at Turn 8 on Lap 17, forcing the British rider out of the race. It meant Locatelli was able to claim third place with Rinaldi being promoted to fourth.