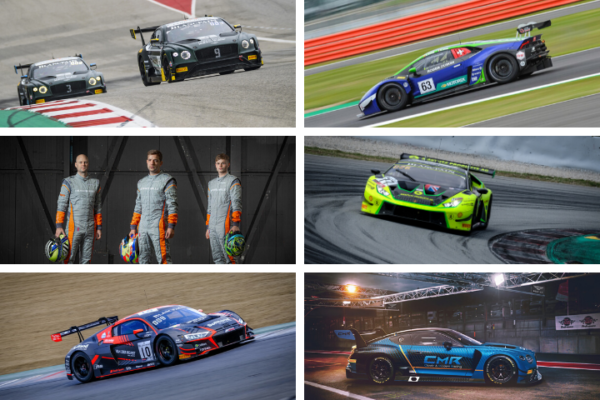 Three teams representing as many manufacturers have confirmed plans to contest the championship for the first time this year, while a further two will return to the series with new technical alliances. All have elected to firm up their plans early as they prepare to go up against highly accomplished rivals in the continent’s premier GT category.
Bentley expands customer roster

Bentley has generated significant buzz during the off-season thanks to a pair of new customer outfits. GT World Challenge America squad K-PAX Racing has expanded its ambitions to the Endurance Cup, with a two-car programme ready to hit the ground running. Its #3 Continental GT3 combines factory stars Jules Gounon and Maxime Soulet with Rodrigo Baptista, while the sister #9 machine features Alvaro Parente, Andy Soucek and Jordan Pepper. Between them, this group of drivers has chalked up more than 100 Endurance Cup starts.

“With the current status of GT World Challenge, we have the opportunity to go endurance racing at some of the most iconic tracks in Europe,” commented K-PAX owner Jim Haughey, whose squad has been affiliated with Bentley for the previous two seasons. “The timing was just right to make the move in 2020.”

While new to the Bentley family, French outfit CMR is no stranger to top-line GT3 competition having contested the Endurance Cup in 2015 and 2016. Charly Bourachot’s squad will field a pair of full-season entries in 2020 and has thus far confirmed three drivers, with Gounon on duty for the Sprint Cup and fellow factory ace Seb Morris contesting Endurance rounds. Pierre-Alexandre Jean will run a full programme, having honed his skills with CMR in Championnat de France FFSA GT/GT4 France.

“The Bentley brand is steeped in more than 100 years of heritage, which is important to us, and customer racing is where its motorsport passion began,” explained Bourachot. “The Continental GT3 is a very impressive car that has been successful around the world in the hands of Bentley customer teams and we aim to do the same.”

A further Continental GT3 is also confirmed for the Endurance campaign, with established customer outfit Team Parker Racing set to run the new Bentley Motorsport Academy programme in 2010. This crew will contest the Silver Cup, with drivers selected through a talent evaluation process.
Optimum steps up with McLaren, Madpanda chooses Mercedes-AMG

The McLaren name will return to the Endurance Cup in 2020 thanks to British outfit Optimum Motorsport, which will field the marque’s 720S GT3 in the long-distance championship.

While new to the series, the team has proven itself with race wins and titles in British GT. Optimum has also assembled a crack driver line-up for its debut season: Rob Bell, who clinched the 2016 Endurance Cup title as part of the Garage 59 McLaren squad, leads the line alongside fellow factory ace Joe Osborne. They will be joined by recently signed McLaren Professional Driver and 2019 British GT Silver Cup champion Ollie Wilkinson.

“I’m delighted to be competing at such a high level in 2020 and excited to join the McLaren Customer Racing family,” commented team boss Shaun Goff. “It has always been our aim to race in GT World Challenge Europe in 2020. I’m especially pleased to be working with McLaren and we have three great drivers in the line-up.”

Also joining the championship is Madpanda Motorsport, which has partnered with Mercedes-AMG for its debut campaign. While the squad itself is new, the man behind it is familiar. Ezequiel Perez Companc, who will combine the roles of team principal and driver, has competed in the series since 2016, scoring several overall podiums. In 2020 he will lead a Silver Cup effort that will contest the full season, with technical support from experienced motorsport engineering firm QEV Tech.

“We are not underestimating the challenge ahead but the support from QEV, the brand-new Evo version of the Mercedes-AMG GT3, and the new tyre from Pirelli for this year will all help us reduce the gap to the other experienced teams straight away,” said Perez Companc. “We plan to do some proper testing ahead of the season and be well prepared for the first race at Monza.”
Emil Frey returns with Lamborghini

Emil Frey Racing will make a welcome return to the paddock in 2020. A regular between 2012 and 2018 with Jaguar and later Lexus machinery, the team stepped back from the series in 2019 as it focussed on developing a new relationship with Lamborghini.

With this process complete, Emil Frey Racing has revealed plans for a pair of full-season Huracan GT3 Evo entries. Albert Costa and Giacomo Altoe will be ever present in the #163, with the vastly experienced Franck Perera joining at Endurance Cup events to ensure an all-factory driver line-up. In the sister #14 car, Norbert Siedler and Mikael Grenier will run the full campaign with Ricardo Feller added at Endurance rounds.

Though it returns with a new manufacturer, Emil Frey Racing has been consistent when it comes to drivers. Costa and Siedler have been with the team since 2016, while Grenier joined for the 2018 Endurance campaign and captured the Silver Cup title with a dramatic final-race victory.

“GT World Challenge Europe is the premier class of GT3 sport,” said team principal Lorenz Frey-Hilti. “The level is intensely high. The drivers and their teams are very accomplished and experienced, but I am confident that, with hard work, we will learn fast and make the best out of what we have.”
Established squads confirm plans

In addition to the new and returning teams confirmed for 2020, a number of established squads have revealed their plans for the upcoming campaign. The accomplished Team WRT has renewed its commitment to the series as a full-season entrant and will continue its long partnership with Audi. WRT is set to confirm its full driver roster in the coming weeks.

Fellow paddock stalwart Barwell Motorsport has announced plans for an Endurance Cup assault with two Lamborghini Huracan Evos. The back-to-back Am Cup champions will defend their class title with Leo Machitski and Richard Heistand contesting the full season, while Adrian Amstutz will join at four events and Richard Abra will compete at the Total 24 Hours of Spa. Drivers for its second entry – which is likely to contest the Silver Cup – are to be confirmed.

R-Motorsport has confirmed that Tom Blomqvist will contest the full GT World Challenge Europe season in an Aston Martin Vantage. The squad’s complete plans for 2020 are yet to be confirmed, though Blomqvist is likely to be part of all-Pro line-ups in both the Sprint and Endurance categories.

Further announcements will follow during the coming weeks, with the full 2020 grid set to be revealed during the series’ official test days at Circuit Paul Ricard (12/13 March). This will kick off what promises to be an exciting year for the championship as it begins a new era as part of the global GT World Challenge Powered by AWS platform.