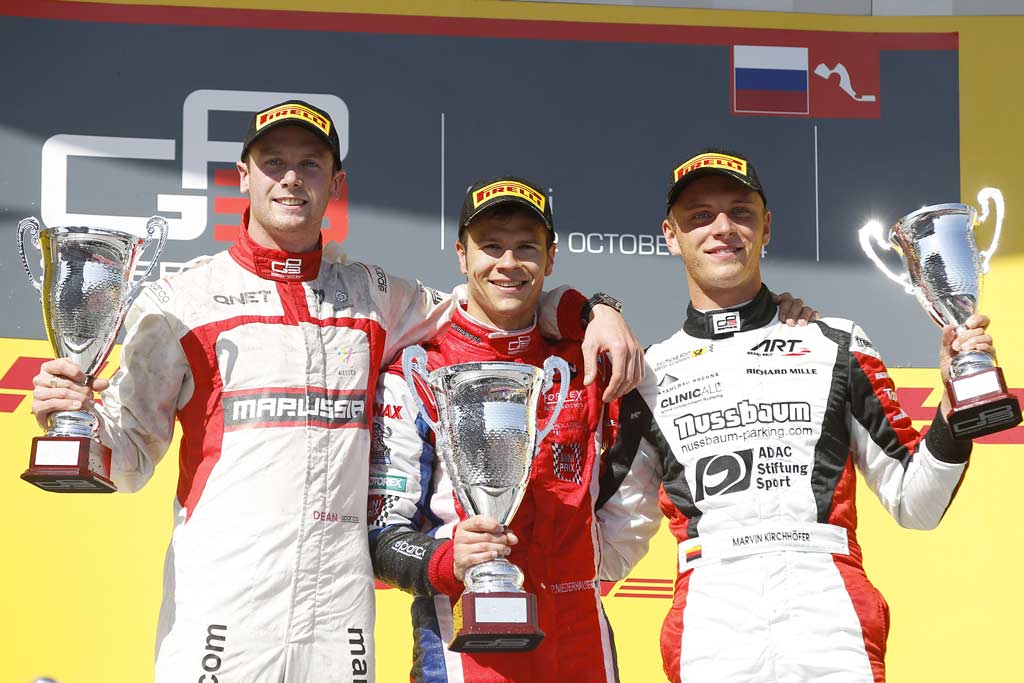 Arden Motorsport’s Niederhauser wins last lap thriller in Russia
What a race and what a last lap! Swiss star Patric Niederhauser was triumphant in Race 2 at the Sochi Autodrom at Round 8 of the 2014 GP3 Series, holding off Koiranen GP’s Dean Stoneman and ART Grand Prix’s Marvin Kirchhöfer in a stunning three-way fight. Series leader Alex Lynn was fifth with the battle for the GP3 title going to the final round in Abu Dhabi.
Niederhauser started from reverse pole and it was his Arden teammate Jann Mardenborough who got the better of Carlin and Red Bull Junior Team driver Alex Lynn – moving into second after the start. The safety car was deployed after contact was made between Jimmy Eriksson and Alex Fontana – the pack bunched up and Riccardo Agostini tagged the back of Fontana. Pal Varhaug and Richie Stanaway were also involved as all four made contact with the barrier and their race was over. All drivers were ok but due to the debris on track, the cars returned to the pitlane and the race was resumed under the safety car.
Eriksson was issued with a ten second stop/go penalty for causing a collision with Fontana which he duly served as the action got underway after the safety came in. Sochi Race 1 winner Dean Stoneman was on the move and he picked off Kevin Ceccon in P5 and then fellow compatriot Lynn in a decisive move for the title. Kirchhöfer had got the move done on Series leader Lynn a few corners earlier as he set his sights on Mardenborough in second.
The German rookie made a successful pass on Mardenborough as the laps ticked down whilst Nick Yelloly got the better of Ceccon for P6. A second safety car was deployed after Russian debutant Nikolay Martsenko stopped at the side of the track.
Once the safety car returned to the pitlane, it allowed the drivers a two lap sprint to fight for the elusive victory. Niederhauser had controlled the race early on with a two second advantage and again had to manage the pack after the safety cars had seen his deficit cut to nothing. Kirchhöfer and Stoneman saw their opportunity to pounce and provided everyone with an epic, entertaining battle until the chequered flag. A three-way battle for the lead emerged with Kirchhöfer briefly leading and Stoneman running side-by-side with Niederhauser.
The Swiss remained calm and fought off the intense pressure from behind to take the chequered flag first by just 0.368s and mark his second victory of the season. Stoneman topped off a superb weekend with second place and Kirchhöfer achieved another rostrum this weekend. Behind them: Mardenborough, Lynn, Yelloly, Celis. Jr and Bernstorff completed the scoring positions.
Lynn remains in a commanding position in the Drivers’ Standings with a 47 point lead (with a maximum of 48 points available in Abu Dhabi.) Therefore Lynn has one hand on the crown but Stoneman’s momentum has seen him jump up into second in the standings on 138, with Kirchhöfer one point adrift on 137.
Carlin remains on top in the Teams’ Standings with 303 points. ART Grand Prix and Status Grand Prix are second and third on 273 and 233 respectively.
The drivers’ and teams’ champion will both be crowned at the spectacular setting of Yas Marina Circuit, Abu Dhabi for the season finale on 21-23 November 2014 –it promises to be a memorable encounter.
Sochi – Race 2
Not Classified
Fastest Lap : Jimmy Eriksson – Koiranen GP : 1 :53.864 on lap 18