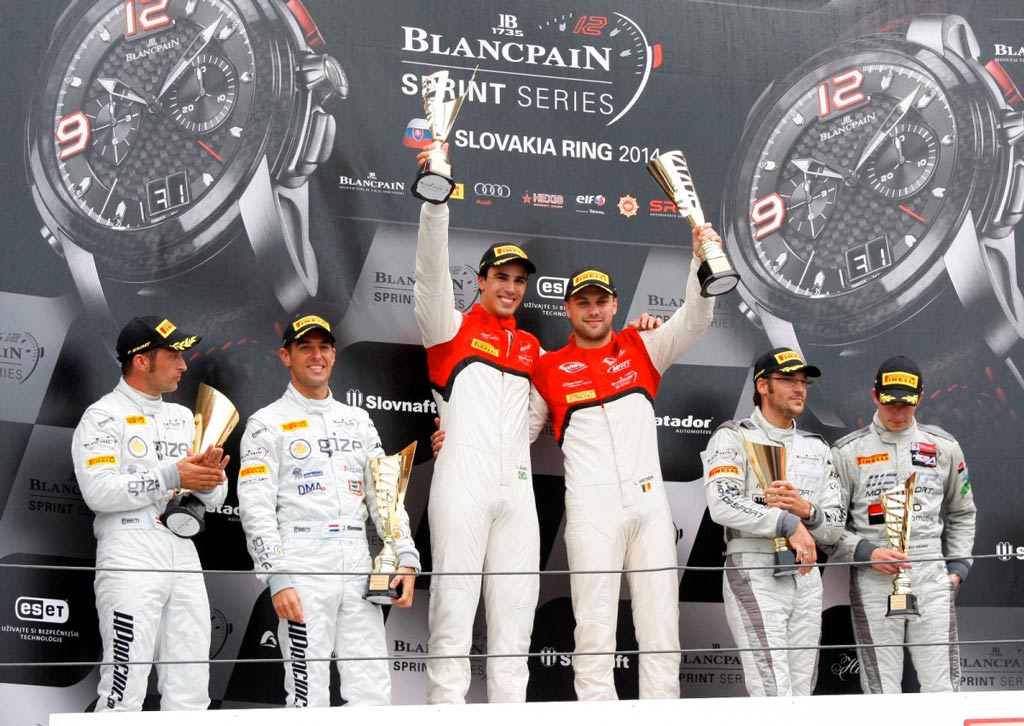 One win and one podium finish for the Belgian Audi Club Team WRT in eventful Slovakiaring weekend
It was definitely two eventful and lively races at the Slovakiaring for the fourth round of the Blancpain Sprint Series as numerous race incidents and changing weather conditions added to the show. At the end of the weekend, the harvest for the Belgian Audi Club Team WRT was positive but not as good as it could have been. Laurens Vanthoor and César Ramos took a brilliant win in Saturday’s Qualifying race before being frustrated on Sunday. On the contrary, René Rast-Enzo Ide were unlucky on Saturday but took a precious podium finish (3rd) on Sunday. The team’s pair of youngsters, Vincent Abril-Mateusz Lisowski, had consistent results, taking two seconds in their class which reinforce their leadership in the Silver Cup. The fourth car, now under the Belgian Audi Club Team WRT banner and entrusted to Stéphane Ortelli and young German Fabian Hamprecht, who debuted with the team, was a victim of the circumstances in both races.
“It has been an intense weekend, with a lot of things happening”, agrees Belgian Audi Club Team WRT Principal Vincent Vosse, “We have seen a lot of good things but also some not so good. All in all, though, I am happy with the results, although we could have hoped for better results in the Main Race after conquering the pole and Race 1, but race incidents are part of racing, as we all know. The good thing is that we gain points on our main rivals in the Teams’ championship, both the Sprint one and the Blancpain GT Series overall one. I also want to stress the good debut with the team of Fabian Hamprecht. Car #9 had a difficult and unlucky weekend but I am definitely happy with what was shown by Fabian.”
The twisty and technical Slovakiaring, located in Orechová Potôň, in the outskirts of Bratislava, proved to be a good ground for the Audis R8 LMS ultra, which shone in qualifying, with Laurens Vanthoor taking the pole and René Rast qualifying an excellent fourth.
The Qualifying Race on Saturday presented itself under the best auspices but a chaotic start, with the green lights coming very late, penalized the first rows, with Vanthoor
losing immediately the advantage of the pole. Contacts in the very compact group were inevitable in the first corners, with the Lambo of Enge crashing heavily and rolling a number of times. Luckily, the Czech escaped unhurt but the race was red-flagged to allow rebuilding of the Armco. At the restart, Rast took third and, soon after, second, after passing 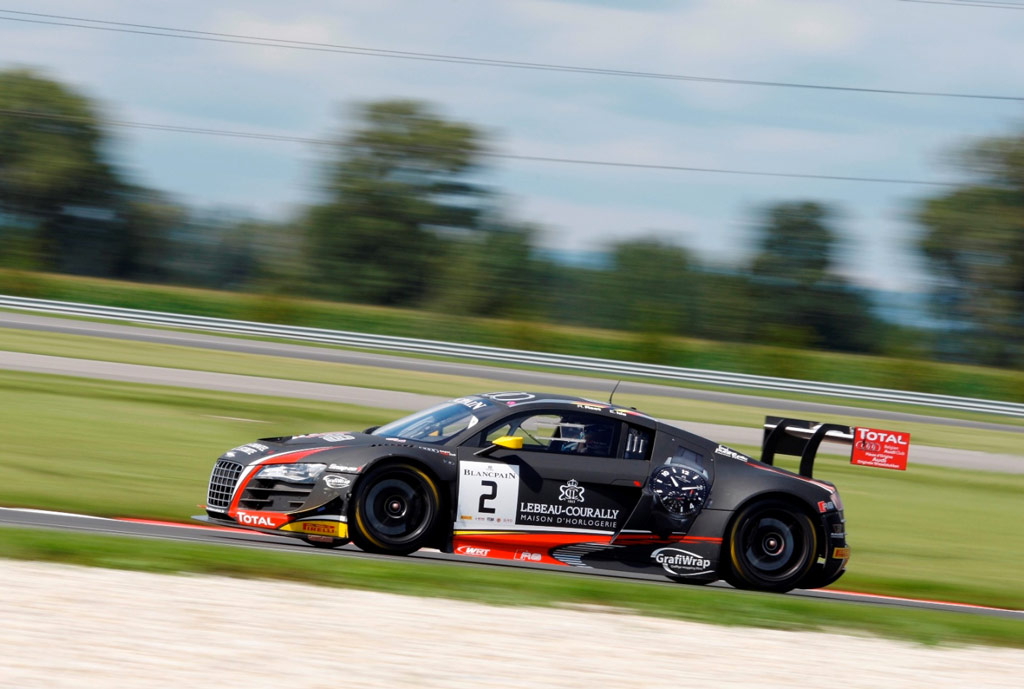 Winkelhock, with Vanthoor taking P4 from Pantano. An excursion into the gravel delayed Ortelli down to P15, right behind Lisowski. Both started then to climb positions through the field. In the meantime, René Rast had taken the lead, after passing Bleekemolen, with Vanthoor fourth (and then third) only 2” behind. Soon after, rain started to fall heavily which eventually led to a second red flag as track conditions were dreadful right after the pit stops. At the restart, Enzo Ide stayed in the lead and when Ramos passed Proczyk 15 minutes from the end, the two Belgian Audi Club Team WRT cars were in control and fighting for victory. As Ramos reduced the gap, Ide made a small mistake three laps from the flag, spinning and sliding down to P9. For Ramos and Vanthoor it meant victory, but it was Vincent Abril putting the show in the closing laps, as the young Frenchman took fourth after a couple of stunning overtakings. Unfortunately, in the final lap he went wide into the gravel, losing two positions. The car of Hamprecht finished 12th after having to serve a drive-through for having pitted under red.
“This was a very long and very hard race”, admitted Ramos, “When I took the wheel of the car for the second half of the race, I did not know what to expect on the wet track. Fortunately, Laurens could give me some pointers over the radio, so I managed to overtake the Lamborghini and then got first when Enzo spun. I am very happy with this first win of the season.”

On Sunday, for the Main Race, the sunshine was back for good, but the start was again marred with confusion, with many cars arriving side by side at the first braking. Ramos, who hadn’t taken the best start, couldn’t avoid contact, ending sideways. The turmoil that followed resulted not only in damage to car #1, which had a visible hole on the left door, but also in the retirement of car #9, as Hamprecht was sent off into the gravel, and in a spin for car #2, with Ide rejoining at the back of the field. First part of the race saw Ramos cruising in P7 with a machine not in perfect conditions, ahead of Abril. After the pit stop, Vanthoor had a scary moment when he went wide into the grass while trying to chase up. The young Belgian avoided the barriers but could not avoid to pit to clean the radiator. He finished 11th, taking the points of 7th in the Pro Cup. Lisowski had a quieter race, finishing 9th overall and taking again 2nd in the Silver Cup, but the heroes of the race were Enzo Ide and René Rast, who after their initial misfortune, charged through the field to take a wonderful third in the final lap, as Rast passed Götz in turn 6 with a breath-taking maneuver. “It was a very close one”, commented the German, “and I must apologize to Max because there was a slight unintentional contact. To finish third after such an unlucky start is quite unexpected. Enzo had a great start but then was an innocent victim of the first corner drama. He did a great job climbing up positions, we had a perfect pit stop and I could finish the job”.
The Blancpain Sprint Series will be back in two weeks, with the fifth round scheduled at the Autódromo do Algarve, in Portimão (Portugal) on 6-7 September.

Provisional Drivers’ standings (Pro Cup) after Round 4 of 7 :

Provisional Drivers’ standings (Silver Cup) after Round 4 of 7 :

Provisional Teams’ standings (Pro Cup) after Round 4 of 7 :