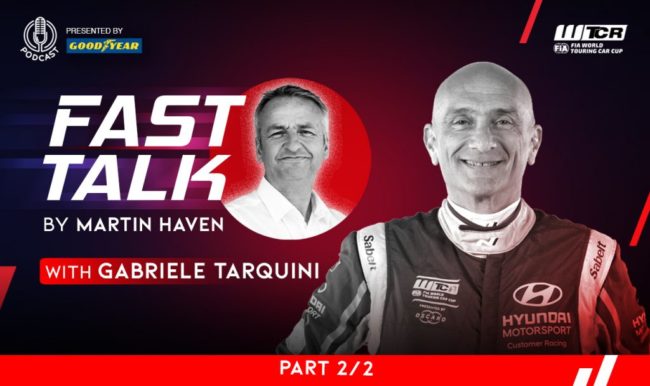 Gabriele Tarquini goes racing because it’s what makes him tick. And while the COVID-19 outbreak has rightly put the brakes on motorsport, the Italian cannot wait for track action to resume.

“I enjoy racing but I have not driven a car for four months and I want to be back,” Tarquini tells host Martin Haven in the latest episode of WTCR Fast Talk presented Goodyear, the official podcast from FIA – WTCR World Touring Car Cup promoter Eurosport Events.

“I dream to be back sitting behind the steering wheel, fighting for the tenths, improving the car. The passion is still there and that’s never ended.”

A racing career that began in Italian Formula 3 in 1983, following world championship success in karting, took Tarquini to Formula One, countless race wins and titles in touring cars and at least two intentions to quit. Thankfully he never went through with those plans on either occasion, and is eagerly waiting to take up his drive in a BRC Hyundai N LUKOIL Squadra Corse for 2020, aged 58.

Following part one on Wednesday, part two today (Friday), returns to 1996 with Tarquini covering racing for Honda, returning to Alfa Romeo, heading back to Honda, leaving for LADA, seeking out new opportunities with Hyundai and returning to FIA World Touring Car racing to claim the inaugural WTCR title in 2018, nine years after he became world champion.

Here’s a guide to what’s coming up in part two:

00m30: Joining forces with JAS Motorsport for 1996 but not entirely happy

02m40: Back to the BTCC… but with Honda after talks with Volvo and Frank Williams

08m38: Honda-powered return to the BTCC in 2000 but keen on European action

12m15: Quiet times and thoughts of retirement after Honda’s change of plan pre-2002

21m30: Looking for other opportunities in the WTCC

24m12: Clever management leads to strong team spirit via a toss of a coin

28m12: Stopping but not stopping after 2009 WTCC title triumph

30m57: Dreaming to be back behind the wheel with the passion still burning inside

34m11: From privateer to factory driver with Honda after meeting and money memories

42m03: Winning not pictured in 2015 as engine problems persist

45m40: Determined not to stop racing

48m37: Scoring a ‘home’ win in Russia during the “best season ever” for LADA

49m48: Party time after winning in the wet

53m50: Developing a winner from scratch

1h01m00: The advantage disappears but the title is still achieved

1h04m05: No more racing for the big deal as approach changes

1h06m30: Happiness is behind the wheel of a racing car

Gabriele Tarquini’s WTCR Fast Talk podcast presented by Goodyear, the WTCR’s official tyre supplier, and hosted by Martin Haven is available in two parts at FIAWTCR.com and other outlets. Click here to listen or follow this link: https://www.fiawtcr.com/wtcr-fast-talk/