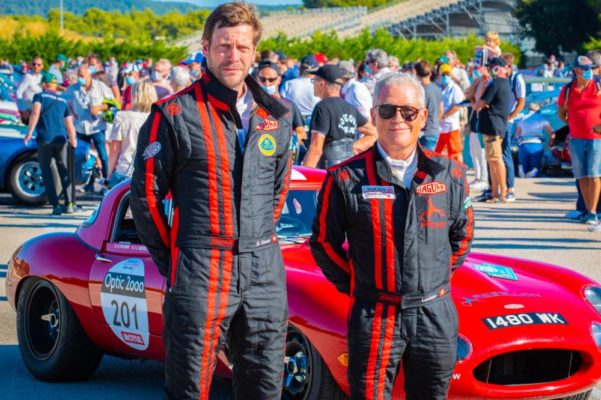 Saturday 5th September: after a special stage on closed roads near Mont Ventoux and another on the Paul Ricard circuit, the competitors passed beneath the finishing arch. The 29th Tour Auto Optic 2ooo came to an end. It had been a crazy week during which the participants had covered 1986 km through the most beautiful French landscapes. It was a unique moment paced by meetings and excitement, but above all passion for the motor car. Review of the final day.

MONT VENTOUX, THE GIANT OF PROVENCE
25 km long, 15 km wide, a total of 26 000 hectares culminating at an altitude of 1912 metres, Mont Ventoux dominates the surrounding plains. It is the highest point of the Vaucluse mountain range, the highest summit in the department and stands alone in the landscape hence the name, the Giant of Provence. And the drivers did their best to conquer this giant during a special stage on closed roads. In the regularity category, Jérome Fombelle and Christian Martin, two journalists entered for Auto Plus & Sport Auto Classiques, won this stage at the wheel of a BMW 3.0L CSL (#90). The 3.0 CSL, considered as the first M derivative of a BMW, is a lightened version (200 kg less) of the 3.0 CS coupe. In fact, this series production car was designed with racing in mind. This crew’s driver-car alliance seems to have worked like a dream! In the competition category, Florent Jean and Yves Jean in a 1981 Ferrari 308 Gr IV Michelotto (#253) came out on top in this stage four seconds in front of their closest pursuer.

Last stage of the day and above all, the last of the Tour Auto Optic 2ooo, Paul Ricard provided competitors with their last chance to do the absolute maximum to score a few points or hold on to their position in the classification. It was the case for the 100% women’s crew, Priam – Powels in their Opel GT (#91). They had finished the first day in 24th place in their category (Regularity HI), and they arrived at Paul Ricard in second spot on the starting line. On their very first outing in the event, the two women held on to their place in the classification and finished this great historic rally on the podium. Bravo ladies!
THE CLASSIFICATIONS
The moment of truth. The cars had passed under the arch, but who were the winners of the 29th Tour Auto Optic 2ooo? In the competition category the name of the winners was familiar to the rally fans. Already victorious in 2017 and 2018, Raphaël Favaro clinched his third success. This year his co-driver was Lucien-Charles Nicolet. Favaro had put his title up for grabs with a change of car in 2020: the winning Lotus Elan was replaced by a 1962 3.8-litre E-Type Jaguar. But the swap had no effect on the two friends and Favaro emerged on top for the third time – congratulations!

In the regularity category a father-son duo were on the topmost step of the podium. Jean-François and François Nicoules were entered in a Ford Mustang and between them they had already racked up three victories in the Tour Auto Optic 2ooo (Jean-François’ first win in 2012 and victories together in 2013 and 2015). They form a redoubtable pairing and the father-son combination proved to be a winning recipe that gave them a fourth victory to add to their laurels in the Tour Auto Optic 2ooo – incredible!