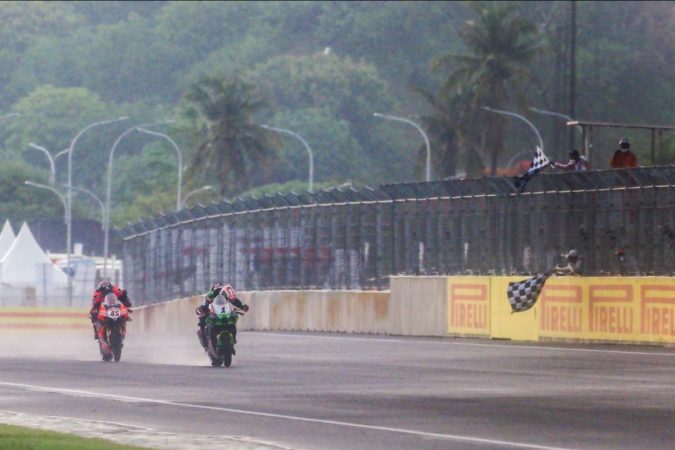 The season ended with an incredible battle between second and third in the Championship in a rain-affected shortened Race 2
A shortened Race 2 for the MOTUL FIM Superbike World Championship at the Pertamina Mandalika International Street Circuit provided plenty of drama in wet conditions, with a delay to the start due to weather conditions meaning the race was run to a reduced 12 laps, down from the originally planned 21 laps. Jonathan Rea (Kawasaki Racing Team WorldSBK) doubled up on victories in Indonesia as he battled it out with Scott Redding (Aruba.it Racing – Ducati) for victory.

As the race got underway, newly crowned Champion Toprak Razgatligolu (Pata Yamaha with Brixx WorldSBK) kept the lead from the race, with the lead five quickly looking to break away. Jonathan Rea (Kawasaki Racing Team WorldSBK) and Scott Redding (Aruba.it Racing – Ducati) were able to break away with relentless pace as they battled it out for Race 2 honours.

Rea and Redding both exchanged first place as they looked to end the season on the top step of the rostrum, including a superb move around the outside of the Ducati rider on Lap 7, although Redding was able to respond. As the final lap started, Redding was able to make a move into Turn 1 before Rea responded into Turn 10. Heading into Turn 16, Redding went up the inside of Rea but ran wide, allowing Rea to move back into the lead of the race and claim his second victory at Mandalika for the 215th podium of his career. Redding’s second place earnt Ducati their 660th race on the podium.
P1 Jonathan Rea (Kawasaki Racing Team WorldSBK)
“Super happy. Thanks to my team, they made all the right decisions. After our tough FP1, we got the bike in a really good area. To come here and win in the dry, win in the wet, in front of the amazing fans… massive thanks to the fans who stayed around in the wet weather. It was so nice to get a race, albeit it was very wet. Super happy with our effort this year. I rode with a lot of heart. I did my best, no regrets. Congratulations again to Toprak and Yamaha and look forward to battling again in 2022.”

P2 Scott Redding (Aruba.it Racing – Ducati)
“I didn’t do as well as Chaz when he left, he took the win! I did my best. None of us have done any wet weather riding this weekend. It was just everyone for themselves, go out and you see it at the beginning of the race; swapping and changing. Jonny got the rhythm. I felt strong then he come past me. I was behind him, I was faster. I think you get a lot of judgement when someone’s in front of you. I tried at the end. Jonny made a small mistake. I pushed. He passed me quite hard on the brakes, it was a big aggressive. I said ‘okay, let’s try it back for the last corner’. I was locking fronts, locking rears. It’s been an amazing season.”

P3 Michael van der Mark (BMW Motorrad WorldSBK Team)
“I’m really happy with this podium. I had an amazing fight with Toprak on track and I really enjoyed this even though I think I could’ve ended up further towards the front. I’m really proud to be on the podium here. We saw today the tarmac is fantastic and in the wet conditions we could have some awesome battles, and in the dry.”