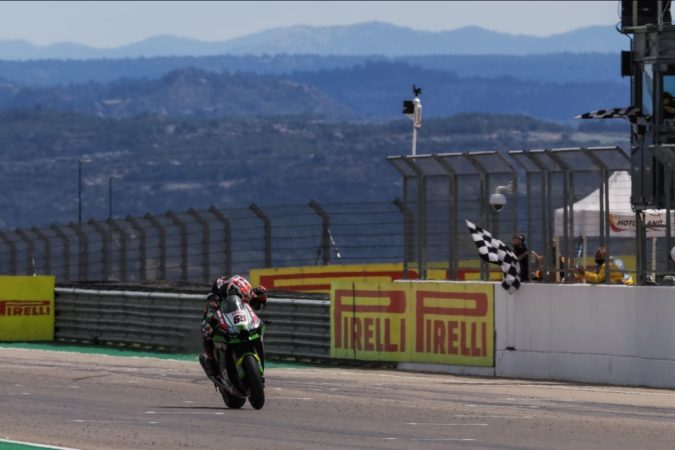 Jonathan Rea (Kawasaki Racing Team WorldSBK) claimed his first win of the 2022 MOTUL FIM Superbike World Championship season. It’s the fifth time of his career that he has won the season-opening race. Rea was able to defend the victory from Alvaro Bautista (Aruba.it Racing – Ducati) and Toprak Razgatlioglu (Pata Yamaha with Brixx WorldSBK) despite the Ducati rider trying to make a move into the final two corners: “I had to work as hard I’ve had to for a long time. It was such an exciting race. I knew it was going to be tough from the beginning with both Toprak and Alvaro. We were right on the border line with the tyre choice. I was not really sure. Honestly in the past, we’ve never made the SCX tyre works in these kinds of conditions. I was able to manage pretty well.”

Bautista crossed the finish line in second just 0.090s behind the winner and claimed his first podium with Ducati since Losail 2019. He had a great start getting the holeshot into Turn 1. After battling with both Razgatlioglu and Rea, Bautista had a huge moment which allowed Rea back through into Turn 1 at the start of Lap 10.
The Spanish rider managed to stay in the fight for victory until the last two corners as Rea claimed victory: “Fighting again for the top positions again after the last two seasons was very important for me. With Jonathan, I passed him many times, but I didn’t want to risk much more. I tried to until the last corner because I could overtake him on the long straight but then I missed a lot of acceleration in every corner and especially in the last corner he could close a bit better the line.”

Reigning WorldSBK Champion Razgatlioglu was in third place 5.4s behind Rea: “It has not been an easy race for me. After my pole position, I tried my best. I was fighting for the win in the first laps. But during the last nine laps, I started to dropped positions. My front tyre was dropping, and I started sliding. Tomorrow, I’ll try again to fight for top positions.”

Michael Ruben Rinaldi (Aruba.it Racing – Ducati) was fourth in Race 1 as he finished around five seconds back from Razgatlioglu. The Italian had been fighting in the lead group in the first half of the race but soon found himself on track on his own: “In the end, fourth place is a good result. I struggled all the race to ride the bike, so we have to improve the settings of the bike, especially turning because I struggle when the tyre drops, and I have less grip. I was able to stay with the top guys for half of the race but then I could not risk too much.”

Andrea Locatelli (Pata Yamaha with Brixx WorldSBK) claimed fifth place as he finished five seconds behind Rinaldi: “This track is not easy for us. We need to work a little for tomorrow to try to stay close and to try to be on the podium.”

Iker Lecuona (Team HRC) completed the top six in his first WorldSBK race: “Really good start here in Superbike. I didn’t expect this sixth position. The goal was to be P7 or P8. The pace I had in the first laps, I was not expecting it. I learned a lot during the race. I tried to follow Locatelli, but he was faster than me. The bike has lot of potential. We need to work and keep improving.” Teammate Xavi Vierge finished in seventh place on his WorldSBK debut.