Self-funded self-belief: The Björk story that was supposed to happen on #WTCR Fast Talk presented by Goodyear 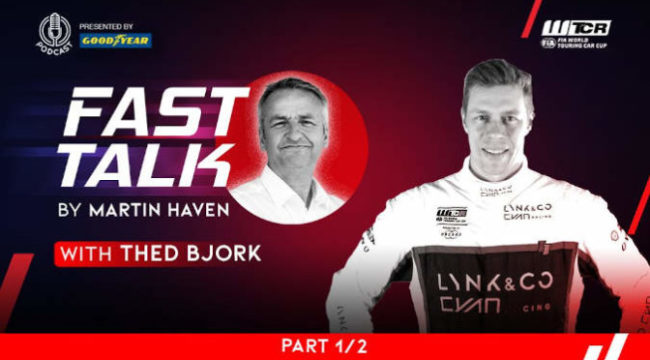 When Thed Björk won his first FIA title in 2001, celebrations at the governing body’s gala in Monaco were somewhat low key.

After receiving a trophy for his FIA Sportscar Championship SR2 category triumph, identical in shape and size to the one Michael Schumacher was handed for becoming Formula One world champion, Björk couldn’t afford the price of a Coca-Cola, such were his early struggles.

It was a different story in 2017. Part of the factory Volvo Polestar line-up, Björk had beaten Nobert Michelisz to the FIA World Touring Car Championship in a tense finale in Qatar. He was in Paris a few weeks later to pick up his trophy at the FIA Prize Giving Ceremony.

While there were no crazy celebrations, Björk could at least afford a drink to cap what was a momentous achievement for a driver who’d simply followed his dream – and raised the budget to do so – as he explains to host Martin Haven in the latest WTCR Fast Talkpresented by Goodyear, the podcast series from WTCR – FIA World Touring Car Cup promoter Eurosport Events.

“I got my first motorbike at the age of three and a half,” remembers the Swede, 39. “We were living in the countryside and every day we were riding motorbikes. But as I got older the motorbikes got faster and then I started to hurt myself. I was a little bit too crazy for two wheels and my family saw that. When I was 11 or 12, we got the possibility to try go-karts so we sold the motorbikes. That was a very clever move for me [because] it’s much harder to fall off a go-kart and I found myself doing what I loved to do.

“I decided I wanted to become a racing driver. I saw Formula One on TV. I saw Michael Schumacher. I saw Ayrton Senna, but Fredrik Ekblom was the superstar in the area where I lived because he was driving in some IndyCar races in America, and if he can do it, I can do it. That’s what we thought, that it was fully possible to become a race car driver.”

Björk’s first race in karts was actually on ice (he finished third) but it wasn’t long before he was mixing it against some of Sweden’s best young karters on asphalt. “I was in the junior series with 30-50 competitors and you had to fight your way through all the time. I was fighting and doing some good results. In 1995 I started with a shifter kart with a 125cc engine. That was my breakthrough because I had figured [driving] out. I almost won the Swedish championship when I was 14 but it took me two more years to win it because I was too aggressive at the beginning.

“We were competing around 30 weekends every year, we grew up on the racing track but we loved that, it was our way to grow up.”

Although Björk was able to race extensively, there wasn’t the family money to go on forever and the more karting he did, the more the need for external finance increased.

“We had [Fredrik] Ekblom before me and Ronnie Peterson before from my big hometown Örebro,” says Björk. “This made it easier for me to interact with sponsors because racing is a part of Örebro. My father was working really hard with his company and he didn’t have the possibility to finance my racing, I had to do it myself. I had to go around getting sponsors [using] every idea I could and it worked because racing was part of this area.”

Peterson, the 10-time Formula One race winner who died from injuries sustained in a fiery crash in the 1978 Italian Grand Prix, remains a big influence on Björk’s career. “Even though he was even bigger in the big world, the legacy was so great [in Örebro] that I was able to become a race driver because of this legacy.”

Björk graduated to car racing aged 16 and within three years, he was Swedish and Nordic Formula 3 champion. He moved to the USA for 2000 and secured the sponsorship to race in the Barber Dodge Pro Series after a 20-minute meeting with two Swedish businessmen based in Boston. He raced in the Daytona 24 Hours, the FIA Sportscar Championship, where he claimed the SR2 title in 2001, at Le Mans in a works Courage, in FIA International Formula 3000, before he made touring car racing his focus from mid-2004.

He began his long association with Christian Dahl’s Polestar (now Cyan) organisation in 2012, winning the WTCC title five years later with Volvo power. He helped Yvan Muller’s YMR outfit to the inaugural WTCR – FIA World Touring Car Cup for Teams in 2018 before scoring the first win in an FIA motor race by a Chinese manufacturer when he won Race 3 at WTCR AFRIQUIA Race of Morocco in 2019 at the wheel of a Cyan Racing Lynk & Co 03 TCR.

Björk will form part of the Cyan Performance Lynk & Co line-up in WTCR 2020 when he will be one of the contenders for the coveted FIA title.

His WTCR Fast Talk podcast presented by Goodyear, the WTCR’s official tyre supplier, and hosted by Martin Haven is available in two parts at FIAWTCR.com and other outlets from 12h00 CET today (24 June) with part two from 12h00 CET on 26 June. Click here to listen or follow this link: https://www.fiawtcr.com/wtcr-fast-talk/