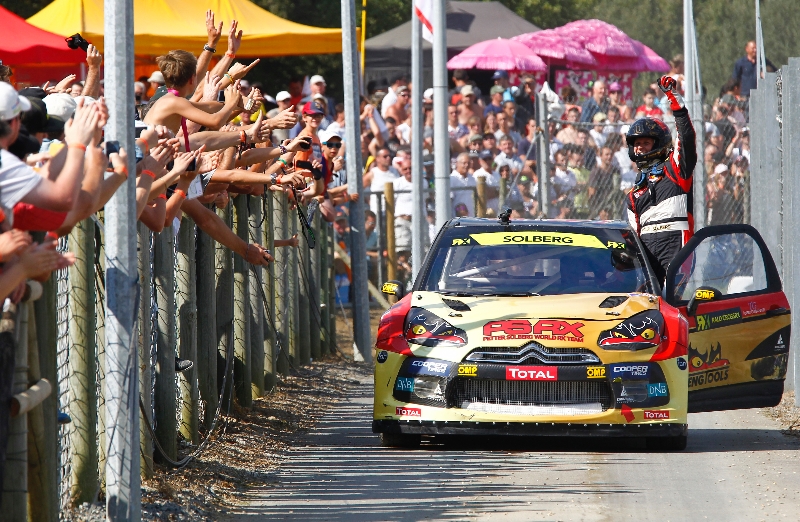 Blazing sunshine greeted more than 70,000 fans at Loheac in north-west Brittany over the weekend to watch 79 cars battle it out across the Supercar plus the Super1600 and TouringCar categories. As well as an experienced field of 32 French drivers, the line-up in France also included star-studded names such as American Gymkhana star Ken Block who made his second appearance in World RX – and finished fourth.

“I’m tired, exhausted, sweaty and happy – this has been an unbelievable weekend,” grinned Solberg who is a likely contender of becoming the first double winner of two FIA World Championships. “Yesterday was not perfect – we struggled with tyrewear but my mechanics worked really hard on the car [Citroen DS3 Supercar] until 1am this morning and I noticed a big change overnight. I have a lot of new parts for the next race in Germany so as long as we keep scoring points, everything looks very good for the Championship. My son [Oliver] also won the Swedish Championship in crosskart this weekend so it’s been a really great weekend all round.”

Successfully pushing Ford Olsbergs MSE back to the top of the Teams’ Championship this weekend was Reinis Nitiss who finished on the podium for the fourth time this season. “Last year I won in Super1600 in Loheac so I am really happy to be back on the podium again but this time in the Supercar. I love this event – there are so many fans and the circuit is amazing with lots of flat out sections.” Team-mate Andreas Bakkerud won heat four but was unable to match of his competitors during the semis in order to reach the final.

Arguably the most impressive drive of the weekend was that of Timmy Hansen for Team Peugeot-Hansen. After winning three out of the four heats and showing an extraordinary pace in the Peugeot 208 Supercar, the Swedish driver was on course to take a win for Peugeot on its home event. “I am a little disappointed to finish third but I know that I won’t be tomorrow morning as it is a great result for the team,” explained 21-year-old Hansen at the end of day press conference. “I gambled a bit in the semi-finals – I had the RPM too low and didn’t have the best start. I was at the back of the grid for the final but I think I had one of the best races of my life as I fought my way up to second place before dropping to third. I know we’ve had a fast car this year and I’m really happy to have been able to have been able to produce a podium for Peugeot in front of the manufacturer’s home crowd.”

America’s Ken Block put on a tremendous show for the huge amount of Hoonigan Racing fans that attended Loheac over the weekend. After a string of top times including a second fastest time in heat two, Block and his Hoonigan Racing Division Ford Fiesta ended the event fourth overall.

Team EKS RX driver Pontus Tidemand was awarded the Monster Energy Super Charge Award after his rapid pace off the line during today’s all-important final. In what was only his fourth World RX outing this year, Tidemand has consistently challenged the World RX permanent drivers in the Audi S1 Quattro Supercar and is proving to be one of the sport’s brightest prospects after finishing fifth.

Volkswagen Marklund Motorsport had a weekend of mixed results after the team reported difficulties with finding the right car set-up. Team-mates Topi Heikkinen and Anton Marklund both made it through to the semis but missed out on a spot in the final after finishing fourth and fifth in their race. Heikkinen has slipped down the overall drivers’ standings to third place, nine points behind Nitiss. Marklund remains fifth overall.

Albatec Racing’s Andy Scott showed good pace over the course of the weekend, making the semis for the Scottish-based team. David Binks, who stepped in for regular World RX driver Jacques Villeneuve, made it an all-British team but the Englishman was unable to match the pace of the hugely competitive field of drivers in Loheac and was knocked out at the Intermediate Classification.

Monster Energy World RX Team’s Davy Jeanney finished third at last year’s Loheac RX and was a firm favourite with the home crowd. However, a technical infringement following heat one saw the Frenchman disqualified and dashed the hopes of seeing him progress to the semis despite finishing second-quickest in heat two. Team-mate Henning Solberg demonstrated good pace during the heats but was plagued by car issues which prevented him from going further.

Elsewhere, it was a strong event for the 18 French Supercar drivers who competed on home soil. Reigning French Rallycross Champion Jerome Grosset-Janin was sixth at the Intermediate Classification stage but was caught in race traffic at turn one in the semis which caused significant damage to his car. Serazin Gaetin also reached the semis but failed to make the final.

In the Super1600 FIA European Rallycross Championship category which fielded 33 cars this weekend, Frenchman Steven Bossard won in front of a delighted home crowd. Russia’s Nikita Misyulya finished second while France’s Andrea Dubourg made it a double podium for the local drivers. Sergej Zagumennov finished fourth and remains at the top of the S1600 standings.

Norway’s David Nordgaard racked up four heat wins and went on to take the win in the TouringCar category at the wheel of a Ford Fiesta. Daniel Lundh and Anders Braten finished second and third respectively. Lundh continues to lead the series.

Martin Anayi, World RX Managing Director for IMG Motorsport, concluded: “Loheac is home to rallycross in France and it’s not difficult to see why – the track, the atmosphere and the fans who come to Loheac make this one of the best events in the World RX calendar. We always knew it would be tough to beat last year’s attendance figures as we had home hero Sebastien Loeb competing but I’ve been informed that we had over 70,000 spectators over the course of the weekend which is fantastic news for our growing Championship. Congratulations once again to Petter for becoming the first driver in World RX to take a hat-trick of wins, he looked untouchable in the Citroen DS3 during the final and is an incredibly talented driver. It is excellent to see Reinis back on the podium again, and of course I am delighted that Team Peugeot-Hansen have finished on the podium at Peugeot’s home event. Both Timmy and the entire teams have worked extremely hard this year and thoroughly deserve a podium here in France.”

Round nine of the FIA World Rallycross Championship will take place at Estering in Germany in two weeks time (20-21 September). Entries for World RX of Germany will be announced next week.

DRIVER POINTS AFTER ROUND 8, WORLD RX OF FRANCE