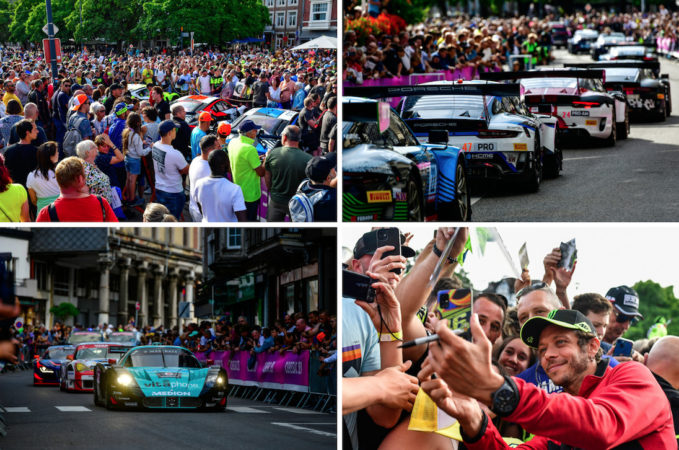 Thousands of fans lined the roads into Spa town centre today (27 July) as a phenomenal collection of GT cars took part in the traditional TotalEnergies 24 Hours of Spa parade.

It marked an immensely popular return for the event, which was first staged in 2002 but could not run at the previous two editions due to Covid-19 restrictions. As such, it had been three years since the public last had the opportunity to experience GT3 cars in this unique setting

Spectators began to gather alongside the roads into Spa before the parade had set off, making the most of the opportunity to soak up the atmosphere. They saw all of the machinery that will contest this weekend’s TotalEnergies 24 Hours of Spa pass by, with the full 66-car field making its way from the circuit to the town.

Nine different brands were on display, representing a roll call of the world’s premier GT manufacturers. German machinery was well-represented thanks to Audi, BMW, Mercedes-AMG and Porsche, while their Italian rivals Ferrari and Lamborghini also drew considerable interest and Aston Martin, Bentley and McLaren added a British flavour to proceedings.
That wasn’t all they saw. The TotalEnergies 24 Hours of Spa hopefuls were joined by cars representing the upcoming weekend’s support races, including the Lamborghini Super Trofeo and GT4 European Series. What’s more, a number of competitors from the SRO 30th GT Anniversary by Peter Auto also took their place in the parade.

This very special one-off event will bring together machinery from the GT1, GT2 and GT3 categories to mark three decades since Stéphane Ratel organised his first international GT event in 1992. Several iconic cars took part in the parade, including old favourites from the GT1 era.

Upon arrival in the town centre all cars were parked to give the public an opportunity to experience them first hand. The stars of this year’s TotalEnergies 24 Hours of Spa then signed autographs for thousands of enthusiastic fans, before heading to the theatre for the drivers’ briefing.

The day concluded with a return journey to the Spa-Francorchamps paddock in preparation for Thursday’s on-track action. Once again, fans were out in force along the roads as the sun began to set over the Ardennes.

Thursday will see focus shift back to activities on the circuit, with four sessions set to take place over the course of the day. The action begins at 10:50 with Free Practice, which will represent the first chance this year for the entire 66-car field to test themselves on the 7km Spa circuit.

Pre-Qualifying begins at 16.15 and will last for one hour, before the most important session of the day takes place at 20.40: Qualifying for the TotalEnergies 24 Hours of Spa. This will decide the 20 entrants who progress to Friday’s Super Pole session, as well as the final grid slots for positions 21 through 66.

Once preparations are complete all focus will shift to the biggest GT race in the world, the 74th TotalEnergies 24 Hours of Spa, which will get underway at 16:45 on Saturday 30 July and conclude at the same time on Sunday. With the parade done and track action ready to take centre stage, the start of the season’s biggest race is drawing closer.