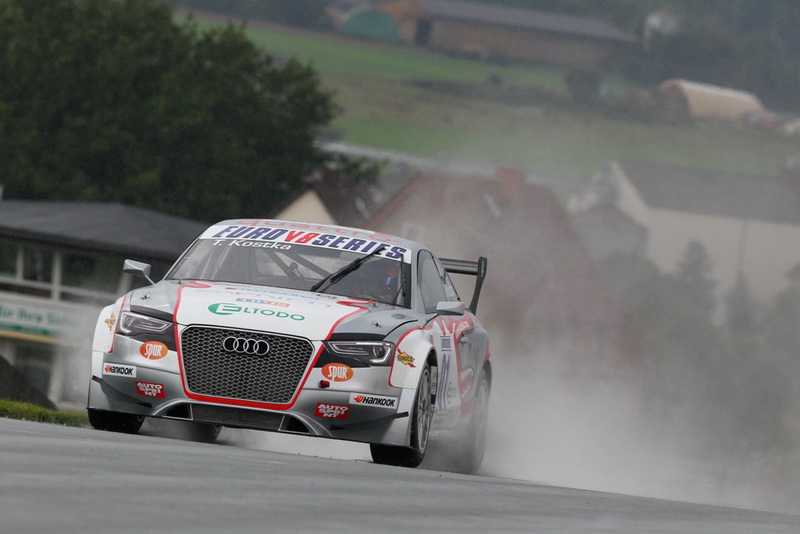 Czech driver Tomas Kostka scored his third pole position of the year today at Sachsenring, in the fifth and penultimate round of the 2014 EUROV8SERIES. The Audi Sport Italia racer lined-up in a very determined fashion at the German venue, which is also hosting the ADAC GT Masters, and confirmed the early expectations that saw him as the favourite.

The qualifications were held with a damp circuit following to an huge downpour, with Nicola Baldan, driving the R.R.T. Mercedes C63 AMG, leading early. As soon as the session progressed the Chevrolet cars of Francesco Sini and team-mate Giovanni Berton alternated at the top followed by Audi’s Zonzini and Kostka.

“I started the session with wet weather tires, but after three laps the track started to dry out and I put slick tires on – said Kostka – I managed to hit the perfect lap in the second half of the session. The weekend is going really well so we can have our say for the race”.

Behind the two works Audi RS5 of Kostka and Zonzini, Sini (Chevrolet Camaro) and Berton (Chevrolet Lumina) will share the second row as the first almost managed to brake out front in the dying minutes of the session. Right behind him, the Mercedes of Baldan and the BMW M3 of Max Mugelli (Team BMW Dinamic) rounding out the top-5.

Despite an off-track exit, Francesca Linossi (BMW M3 Team BMW Dinamic) ended up in 9th place behind the Audi RS5 of Ermanno Dionisio and the M3 of Jonathan Giacon.

Tomorrow’s race will take place tomorrow at 14:05, after a 15-minute Warm-Up at 8:10. A lot of people is expected on-track and in the paddock considering the amount of fans seen on Saturday. The EUROV8SERIES fans at home will be able to enjoy the race thanks to its worldwide live TV coverage, live and delayed.