Villorba and Roda get to Monza as leader by one point 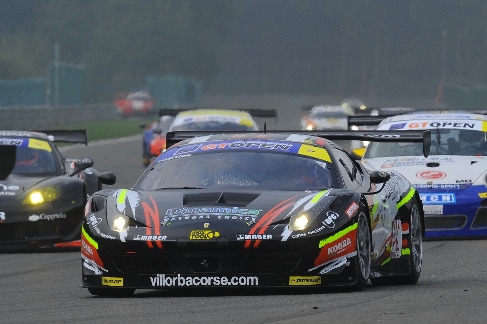 Villorba and Roda get to Monza as leader by one point
The International GT Open 2014 enters its final fourth of the decision with another of its landmark events: Monza. The legendary Autodromo Nazionale has always been a regular and popular presence in the series’ calendar and actually holds the ‘title’ of having hosted the very first International GT Open event, back in April 2006.

With the championship situation completely open in all categories, Monza will be a crucial round in the fight for the titles, ahead of the final round at Barcelona, which can be expected to be decisive once again. In the overall standings, Andrea Montermini-Niccolò Schirò, the pair of Villorba Corse, come to their home race with the tightest advantage, only one point (158 vs 157) on the V8 Racing Corvette of Nicky Pastorelli-Miguel Ramos. No doubt that the duel between the Cavallino and the ‘Vette, on a power track like Monza, is going to be exciting. Third but only 11 points behind, Daniel Zampieri-Roman Mavlanov (SMP Racing Ferrari) haven’t said their last word.

In GTS, another local hero is on top of the standings, Giorgio Roda, the young leader of the AF Corse squad, but his advantage has dropped to only 9 points over José Manuel Pérez-Aicart, with the other Ferrari of SMP Racing, and the Autorlando Porsche of Joel Camathias-Matteo Beretta, following a very positive trend, is now a third player to take in consideration, only 13 points behind.

It is a tradition that the Monza round attracts interesting novelties, with two clearly sticking out this time. As already announced, Monaco Racing Experience, a new team based in the Principality, will make its debut in the GT Open with a McLaren MP4 12C for British-born gentleman driver Grant Tromans and GT specialist Francesco Castellacci. The other interesting debuting car is the Camaro Sereni GT3 developed and entered by Reiter Engineering. A “wild newcomer” into GT3 racing, theSereni Camaro will be driven by two well-known faces in GT: Thomas Enge, the Czech former F.1 driver, and young German Maximilian Völker. Fans in Monza will certainly enjoy the sound of the sound of the 7.9-litre engine of this spectacular machine, which actually already raced in GT Open context, during its development phase, in the 2012 Winter Series at the Ricard.

The rest of the grid is stable, with a couple of changes worth mentioning. Ombra Racing is back with its two cars, with local hero and GT Open star Lorenzo Bontempelli alongside Stefano Costantini on this occasion, and Federico Leo subbing for Michele Rugolo alongside Claudio Sdanewitsch on one of the five AF Corse Ferraris, where Zlobin-Persiani and Lathouras-Lyons make second appearance.

Italian Porsche teams will have a strong presence, as Ebimotors is back for this round with Ivan Jacoma-Adriano Pan, and Autorlando Sport enters a second 911 R for Emanuele Romani and Thomas Gruber. The Austrian driver, a popular figure in the championship some seasons ago, makes a very welcomed return after a couple of years spent in the US for professional reasons.

Monza’s autumn event will exceptionally see Qualifying 2 taking place on Sunday morning, ahead of Race 2. Italian fans will have the possibility to enjoy a full program of eciting races, as the International GT Open and its sister series, the Euroformula Open, will partner once again with two great series such as the SEAT Leon Eurocup and the Radical European Masters, and joined for the first time by the new Italian F4 Championship powered by Abarth.