With Swiss precision: Lucas Mauron wins at Assen on Saturday 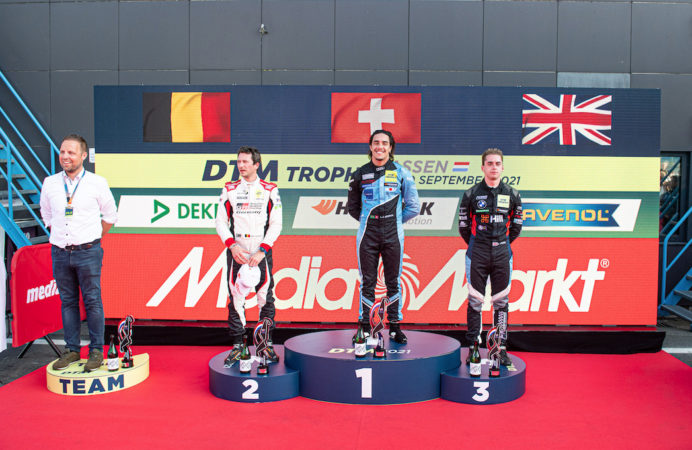 Swiss Lucas Mauron has won the DTM Trophy race at the TT-Circuit Assen in The Netherlands on Saturday. With the Heide-Motorsport Audi, Mauron secured a flawless lights-to-flag win. Things were only getting tight for him at the start as well as at the restart following the only safety car intervention in the race, but in both cases, Mauron successfully defended the lead. The Audi driver decided the outcome of the race around the halfway point when he was able to pull away from his rivals. After 19 laps, he crossed the finish line to win with a margin of 6.180 seconds. For himself and for Audi, it was the first victory in the junior race series since the first race during the 2020 season finale at Hockenheim.

Behind the race winner, there were intense position battles. Belgian Toyota driver Nico Verdonck (Ring-Racing) and KTM driver Reinhard Kofler (True Racing by Reiter Engineering) from Austria staged entertaining wheel-to-wheel duels on several occasions. Kofler kept Verdonck under pressure for many laps and found a way past on lap 15. However, Kofler exceeded the track limits while doing so and had to hand back the position as a result.

Subsequently, Verdonck, who had started from pole position, held on to second place until the end. Kofler was third across the line, but dropped back to sixth in the classification due to a five-second time penalty. Instead, the points’ leader, Ben Green from Great Britain, was allowed to step onto the podium in third place. With the 15 points for third place, the FK Performance Motorsport BMW driver extends his lead in the drivers’ standings.

Two time penalties changes the order behind Mauron and Verdonck

His fiercest driver in the battle for the title, CV Performance Group driver William Tregurtha, was classified fifth. Initially, the Mercedes-AMG driver had crossed the finish line in seventh pace, but was promoted two positions following time penalties imposed on Kofler and BMW driver Theo Oeverhaus (Walkenhorst Motorsport). Green’s teammate Moritz Löhner (GER) ended up between the two title candidates in fourth place of the classification.

In the overall standings after nine of 14 races, Green and Tregurtha are separated by 15 points. The BMW driver has 163 points to his tally, Tregurtha 148. Green’s fellow BMW driver Michael Schrey (Hofor Racing by Bonk Motorsport) didn’t score any points, finishing eleventh. With his total of 110 points unchanged, the title hopes of the third-placed in the standings were reduced further.

The second DTM Trophy Race at the TT-Circuit Assen gets underway on Sunday at 3.10pm. From 3pm, the race is broadcast live on free-to-air TV channel SPORT1 as well as the streaming portal DTM Grid (grid.dtm.com) as well as DTM’s official YouTube channel.