Almost is Never Enough – 2014 Singapore GP, Sunday
Pastor Maldonado finished twelfth with Romain Grosjean directly behind him in thirteenth after a full and eventful Singapore Grand Prix on the Marina Bay Street Circuit. The race – which featured a safety car period – ended due to the time limit being reached rather than completing the allotted number of laps. 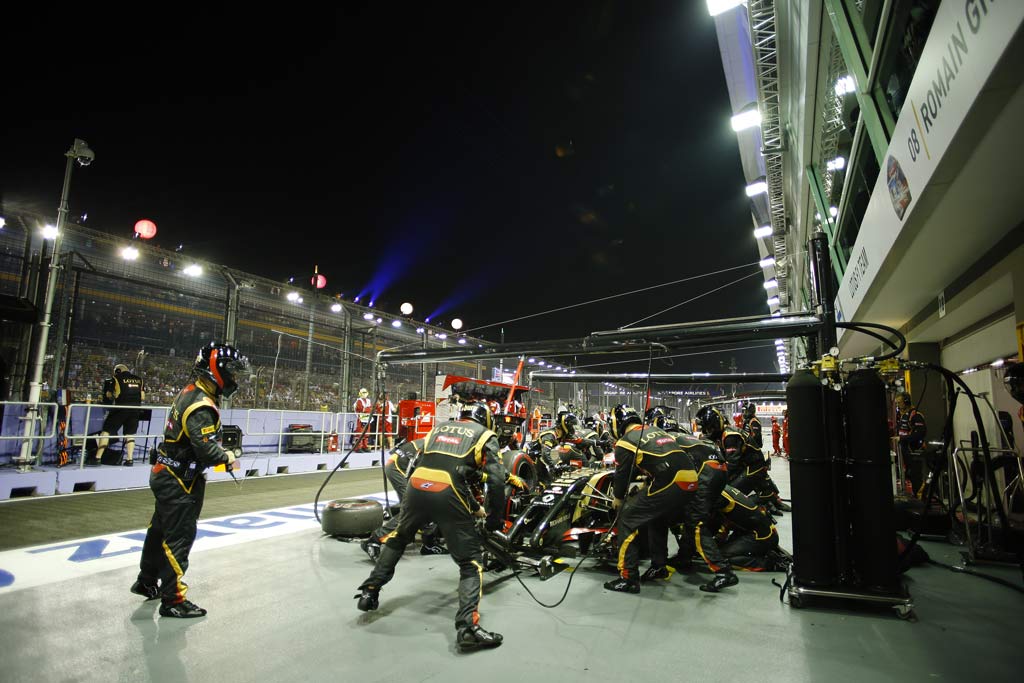 Romain Grosjean, P13, E22-03
“It was hot out there; things were looking pretty alright until the safety car, we were fighting for points. Unfortunately, I tried to attack too hard on the restart. I wanted to give it everything and with cold soft tyres after a slow safety car period, it was just too much once at the corner. From then on, I couldn’t pass back up through the field to get points.”

Pastor Maldonado, P12, E22-02
“We got the maximum out of our performance today and we had a strong consistent race. I’m pretty happy about this after the issues we had earlier in the weekend. I pitted once more than the others during the safety car period but it didn’t affect my position. It was a tough race, especially the last ten laps where the tyres needed a lot of managing, but I think we were able to do a great race today.”

Federico Gastaldi, Deputy Team Principal
“We were very close to scoring points with Pastor and Romain today. Unfortunately we couldn’t convert the potential into reality in the end but the team did a great job to get both cars to finish the race after the difficulties that we had through the course of the weekend. So I’m happy. Not rock and roll, but happy.”

Alan Permane, Trackside Operations Director
“Unfortunately we didn’t have the pace to challenge for points today but we were very close, closer than we have been for a long time. The safety car period obviously influenced our race strategy so it’s hard to say what the maximum could have been were it not for that. We’re pleased with the improvement of the E22 which we hope to be able to harness in the next races.”

Simon Rebreyend, Renault Sport F1 track support leader
“After the disappointment of yesterday, the Power Unit performed well today, with no issues at all, which is the minimum requirement for every weekend. The drivers were therefore able to show a much more representative pace in the race and could race the Saubers, Force Indias and Toro Rossos. This is much more where we should be and gives confidence for the next race in Suzuka.”