Chasing fast lap times at Lausitz: final official test for 2021 DTM prior to the season opener 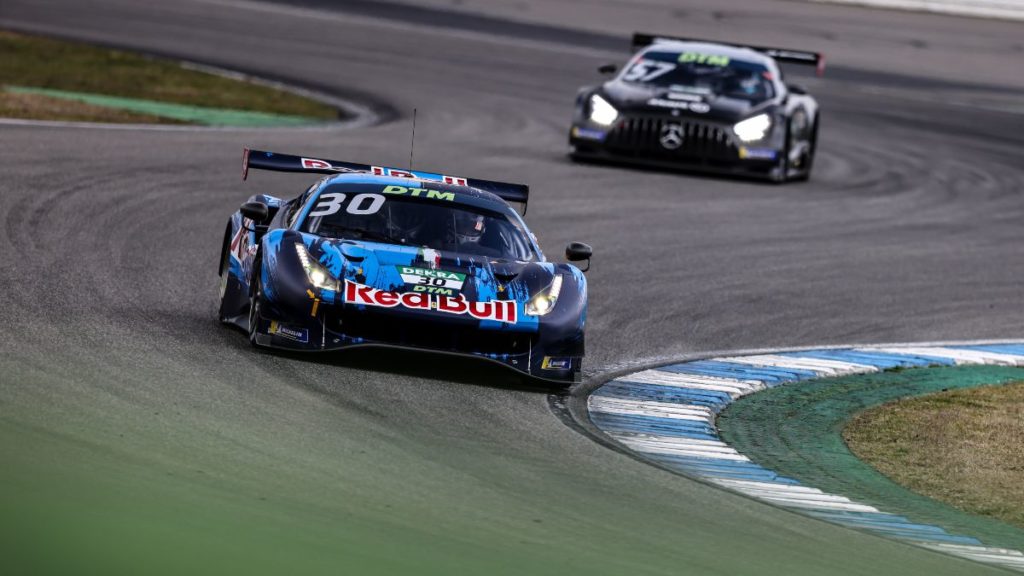 The countdown for the 2021 DTM season opener at Monza in June is running: in the final official pre-season test at DEKRA Lausitzring from Tuesday to Thursday, nearly all 20 drivers from the international field will be racking up their laps.

Ferrari-Team AF Corse will be participating in the test with all three Red Bull drivers for the first time. Nick Cassidy (NZL) will be making his debut as a DTM driver. The New Zealander will be sharing driving duties behind the wheel of the AlphaTauri-Ferrari 488 GT3 Evo with Formula 1 driver Alex Albon (THA) while youngster Liam Lawson (NZL) is embarking on a full-season campaign. “DTM is a fantastic championship. I am looking forward to being among these big drivers’ names and great manufacturers,” says the 19-year-old, who already knows the 4.570 kilometres long Lausitzring from previous days in Formula 4.

Mike Rockenfeller and Vincent Abril: 15 years in DTM against a DTM rookie with GT experience

“I definitely still need more laps,” Mike Rockenfeller (GER, ABT Sportsline) underlines. The 2013 champion will be taking on his 15th DTM season. “It is exciting especially because of the changes in the technical regulations. I am convinced that DTM will be having a great year.” Two-time champion Marco Wittmann (GER, Walkenhorst Motorsport) shares this view: “Because of the different car concepts, there will be different favourites at the various tracks. As a result, predictions are even more difficult.” In the first official test at Hockenheim in early April, Wittmann was the busiest driver with 246 laps. “A new team and a different car, we first have to find the limit.”

Vincent Abril (Mercedes-AMG Team HRT) is a seasoned GT driver, but still an unknown quantity in DTM. As a result, the media were even more surprised as the Monegasque usually featured quite high on the timing sheets at Hockenheim. “For sure, I did a lot of championships in GT3, but DTM is going to be a highlight. When I was a kid, I already watched the DTM-races on TV and admired how close the racing was.” For Abril, it is the first time since 2012 that he doesn’t have to share the car with another driver. “It will be interesting. For the first time, I don’t have to make any compromises and can fully focus on myself.”

His fellow Mercedes driver Lucas Auer (AUT, Mercedes-AMG Team WINWARD) ended up fastest at Hockenheim. “The word test says it all. There is room for improvement in every aspect, therefore the test days are extremely important for me”, the five-time DTM race winner says. “My team, they are full professionals with vast experience in GT racing while I can add my DTM experience. We have a very good interaction which is why I am convinced of our combination.”

ABT Audi driver Sophia Flörsch has to restrain herself

Sophia Flörsch (GER), the first woman to race in DTM since 2012, is looking forward to her new car as she was still driving a test car at Hockenheim. “When the new R8 is running well, it will be my great love,” says the 20-year-old who will be driving an Audi R8 LMS run by ABT Sportsline. “Compared to Formula 3, I have to restrain my aggressivity on the throttle and the steering wheel,” she found out during the first test. “Driving assistance systems such as ABS or traction control are also still unusual for me.”

At the Lausitzring, former Grand Prix driver Timo Glock (ROWE Racing) will have his first outing with a BMW equipped with Schaeffler Paravan’s Space Drive system, so without a mechanical steering column. The electronic steering system has also been installed in the Mercedes of two-time champion Gary Paffett (GBR, Mercedes-AMG Team Mücke).

Glock and Wittmann will only be testing on Tuesday and Wednesday as their two BMW teams will then be heading to the Nürburgring for a race event. The same applies to Gary Paffett and DTM runner-up Nico Müller (SUI, Team Rosberg), whose presence is required in Monaco. Glock’s teammate Sheldon van der Linde will not be in action at Lausitz and neither will be Belgian Esteban Muth, who only entered DTM with T3 Motorsport a few days ago. However, the Lamborghini Huracán isn’t ready yet.

During the six test sessions, the teams also have to complete duties for the DTM organisation ITR. Here, it is about the suitable compound from the new tyre partner Michelin and about evaluation of further vehicle data for the so-called ‘balance of performance’ or BoP for short, aimed at a performance-based equality of chances for the different car concepts from Audi, BMW and Mercedes-AMG as well as newcomers Ferrari, Lamborghini and McLaren. While on one hand, nobody wants to be fastest, but definitely not be last on the timing sheets either, the second official DTM test may very well become an assessment that can be taken seriously.

For the three-day test at Lausitzring, located south of Cottbus, the DTM Trophy is present as well. In six test sessions, separated from DTM, teams from this successful junior race series will also work on the best possible preparation for the season opener at Monza. In total, 21 drivers, male and female, have been entered for the season. While Tim Heinemann (GER) is switching to the Aston Martin Vantage run by PROsport Racing for his title defense, three lady racers will be taking on the competition in the DTM Trophy: Sophie Hofmann (GER, Heide-Motorsport) with the Audi R8 LMS, Laura Kraihamer (AUT, True Racing) with the KTM X-Bow and Stéphane Kox (NDL, Ring-Racing) with the Toyota GR Supra.