Fantastic win for the Belgian Audi Club Team WRT at the Spa 24 Hours! 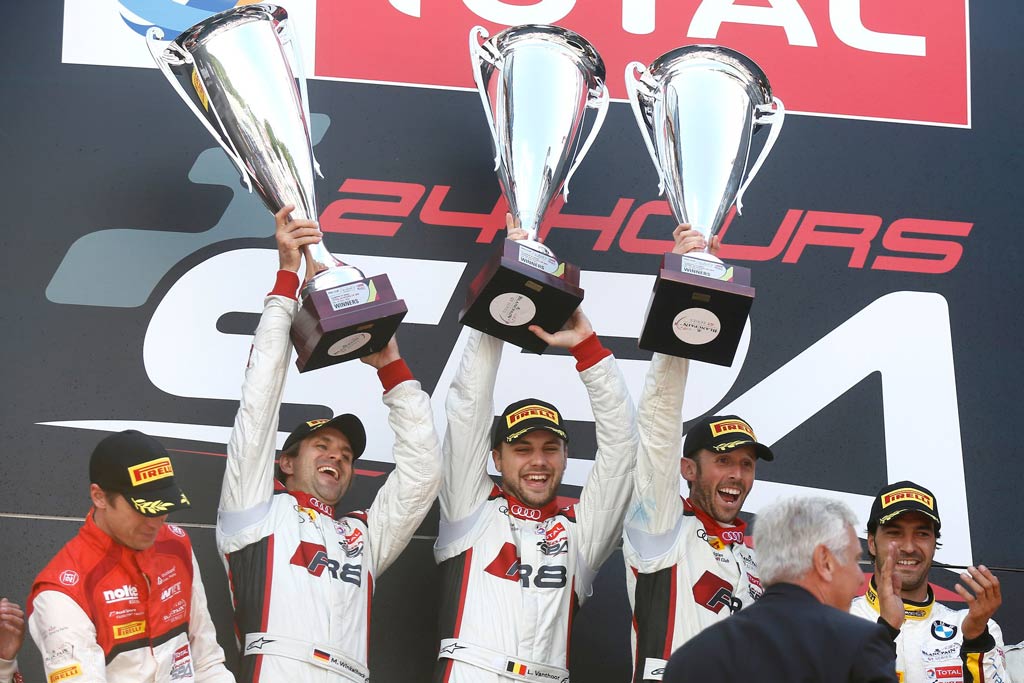 It was the result everybody would have secretly dreamt of, but eventually it also became reality: the Belgian Audi Club Team WRT has won the Total 24 Hours of Spa-Francorchamps, offering Audi its third success in four years in the world’s most prestigious GT race, which, in its 90th anniversary, proved to be worth of its reputation. After 24 hours of a race conducted at sprint pace, with not a single drop of rain and marred with race incidents, Laurens Vanthoor, Markus Winkelhock and René Rast took a magnificent victory, the second for WRT after the one in 2011, by only 7 seconds over their main rivals, with whom they battled until the very end. The Belgian Audi Club Team WRT had the satisfaction to take also the third spot on the podium, with Christopher Mies-Frank Stippler-James Nash, and also to bring to the finish its four cars, with André Lotterer-Marcel Fässler-Bénoît Tréluyer taking P12 overall and Jean-Luc Blanchemain-Fred Bouvy-Christian Kelders-Vincent Radermecker finishing 9th in the Pro-Am category. For Audi, the win at Spa adds to the ones at the 24 Hours of Le Mans and Nürburgring, a hat-trick that clearly demonstrates the marque’s endurance racing expertise.
Belgian Audi Club Team WRT team principal Vincent Vosse was almost speechless after the race: “What can I say? It is difficult to express with words what I feel at this moment”, he admitted, “It has been a fantastic victory and a wonderful weekend, we couldn’t ask for more… Winning by a handful of seconds adds much more to this win. It has been an extremely tough race, very closely-fought and we have had our difficult moments too… On Sunday morning, we were not so confident, then we changed our strategy and went for full attack and that proved to be the right move. Our four cars have finished, two are on the podium, which means that this is the fourth year on a row that we finish on the podium. It’s just incredible! The entire team and all the drivers have done a terrific job, I think I will never forget the first stints of Laurens and the last one of René, amazing!” And summing up everybody’s feelings in the team during the well-deserved celebrations, Vosse concluded: “You work so hard the entire year for this race, you think of it every minute for so long that now, when you have reached your goal, you are simply wiped out…”
The winning car #1 had started the race leading it, thanks to the brilliant superpole conquered by Laurens Vanthoor, but then a very turbulent phase of the race, with numerous accidents leading to four different safety-car periods and even a red flag of over one hour, brought the leading trio down in the standings. It was only during the seventh hour that the Audi R8 LMS #1 retook the first spot. From there to the end, especially in the final hours, the race was a long duel with the leading BMW, with pit stop strategy playing an essential role. Finally, Winkelhock, Vanthoor and Rast, who drove in the last part of the race, emerged as victors by a margin of 7 seconds only. “Right now, I feel a little bit overwhelmed”, confessed Laurens Vanthoor, “I still cannot measure what it means to win here. Everybody did an incredible job, and I want to thank my team mates, Markus and René, for replacing me this morning when I felt ill. We fought hard, didn’t make mistakes and didn’t suffer any trouble. It was a perfect race for us…”
For the young Belgian comes also the satisfaction of having taken the lead in the points standings of the Drivers’ championship; he will go to the last round at the Nürburgring in September with a 7-point advantage. Similarly, the Belgian Audi Club Team WRT has taken the lead in the Teams’ standings.

Car #3 of Christopher Mies-James Nash-Franck Stippler took an excellent final third position, although there were some regrets for having to abandon the fight for victory after many hours in the forefront. “We paid the two drive-throughs we were inflicted”, explained Stippler, “so there is some disappointed but it is still great to take third and contribute to the team’s great day”.

Car #2 of the “Le Mans stars”, André Lotterer-Marcel Fässler-Bénoît Tréluyer, was also in contention for the podium but lost any chance five hours from the end after a collision with a slower car at La Source during an overtaking. Then driven by Tréluyer, the car lost precious time in the pits for repairs to the left front suspension and the splitter. “It’s a pity because we also had the pace to be on the podium”, said Marcel Fässler, “but these things happen, and the risks deriving from traffic and non-professional drivers are part of endurance racing.”

Car #4 of Jean-Luc Blanchemain, Christian Kelders, Vincent Radermecker and Fred Bouvy had a relatively smooth race up to the 9th position in the Pro-Am category. “It’s an excellent result for a team composed of two gentlemen and two semi-professional drivers”, analyzed Blanchemain, the only non-Belgian of the quator, “we haven’t done any big mistake and to finish 9th out of 30 Pro Am cars and in P20 overall out of 60 starters is not bad at all”.
Blancpain Endurance Series – Round 4
24 Hours of Spa-Francoprchamps, Belgium
26-27 July 2014
1. Vanthoor-Winkelhock-Vanthoor (Audi R8 LMS ultra) 527 laps in 24h00m42s485
2. Luhr-Werner-Palttala (BMW Z4) + 7s077
3. Mies-Stippler-Nash (Audi R8 LMS ultra) – 1 lap
4. Ortelli-Guilvert-Sandström (Audi R8 LMS ultra) – 2 laps
5. Buhk-Götz-Jaafar (Mercedes SLS) – 4 laps
12. Lotterer-Fässler-Tréluyer (Audi R8 LMS ultra) – 11 laps (8. Pro Cup)
20. Blanchemain-Kelders
Drivers’ provisional standings after Round 4 of 5 (Pro Cup):

Teams’ provisional standings after Round 4 of 5 (Pro Cup):