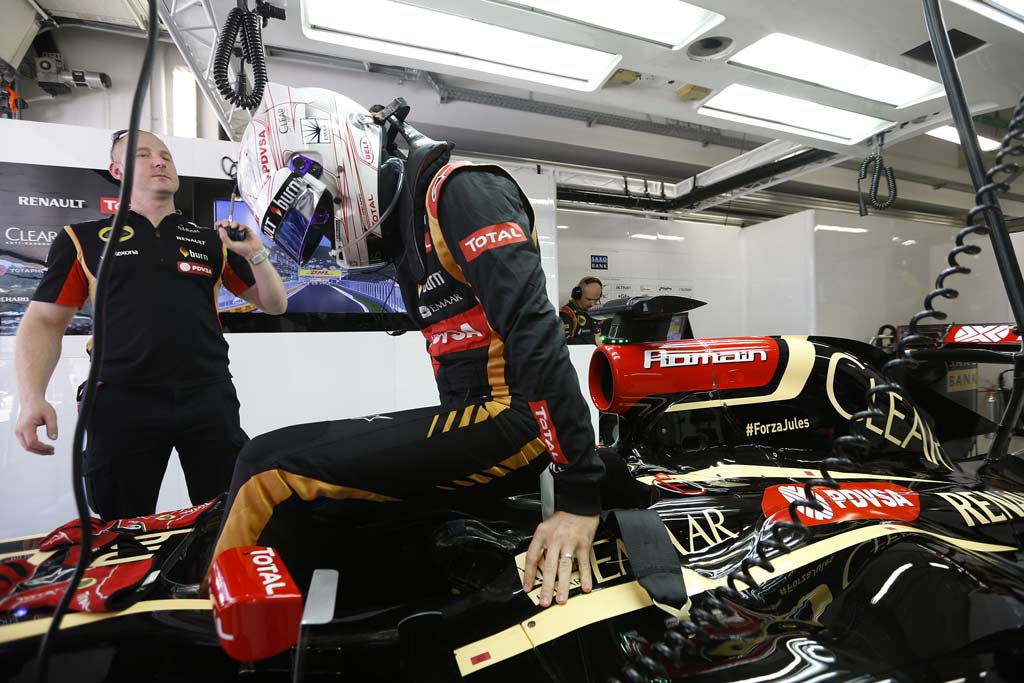 Romain Grosjean led home Pastor Maldonado in the first Russian Grand Prix at the impressive Sochi Autodrom. Both cars struggled for grip and performance during the course of the 53-lap race, played out under glorious blue skies. Romain was given a five-second penalty after contact between his car and Adrian Sutil’s Sauber. Romain was classified seventeenth and Pastor eighteenth.

Romain Grosjean, P17, E22-03
“The car felt okay to drive today, which was a big improvement on the previous two days and a testament to the work the team has put it over the week. The main challenge was the race start. It was hard to get the tyres up to temperature over the first few laps, so much so that I thought I had a puncture at the beginning. After that, it was a straight-forward race aside from the incident with Adrian Sutil. He was on the softer tyres and had a lot more grip than me going into T3. That corner closes up a bit on exit and he didn’t want to go too much off the racing line. I was already on the maximum for the braking zone and we just touched a little. It felt more like a racing incident to me but never mind, we head to Austin and hope for better things.”

Pastor Maldonado, P18, E22-02
“We really struggled for balance on track today and it made for a very tough race for us. We started on the medium tyre, which made it difficult to make progress in the early laps. We then moved to the soft compound, but even late in the race it was a struggle to find grip. My side of the garage lost out quite a lot from our issues on Saturday as we weren’t able to improve the car and in particular the balance. It was frustrating as we really wanted to put on a good show as the Sochi Autodrom is a fantastic circuit. I can’t wait to return next year in a faster car with a different tyre allocation as there is fantastic potential here.”

Federico Gastaldi, Deputy Team Principal
“Our performance today was nothing to write home about which is a complete contrast to the facility here and the reaction we received to Formula 1 on our first visit to Russia. The Sochi Autodrom is highly impressive and there is a lot of potential for great racing over the years to come. Both our drivers kept focused and brought their cars home, but we share their frustration at the performance level here this weekend. We have three races left in 2014, but our focus is very much on 2015 as we target a return to form.”

Alan Permane, Trackside Operations Director
“We ran a split tyre strategy on our cars but we struggled with both approaches. It’s no secret that this circuit didn’t suit our car with the tyre allocation too hard for us to be able to make anything of this weekend. Pastor obviously faced the setback from missing most of the running yesterday whilst Romain also received a five-second penalty in the race which did seem tough. We certainly hope for better results and performance from the final three races of the season.”

Simon Rebreyend, Renault Sport F1 track support leader
“That was a difficult race for us, and I thought Romain’s penalty was harsh. The fuel and energy consumption were a bit tight up until the finish, but I think everyone experienced that. We did everything possible to balance it out and give both drivers maximum power, but it still wasn’t sufficient to keep pace with the front-runners today, unfortunately.”