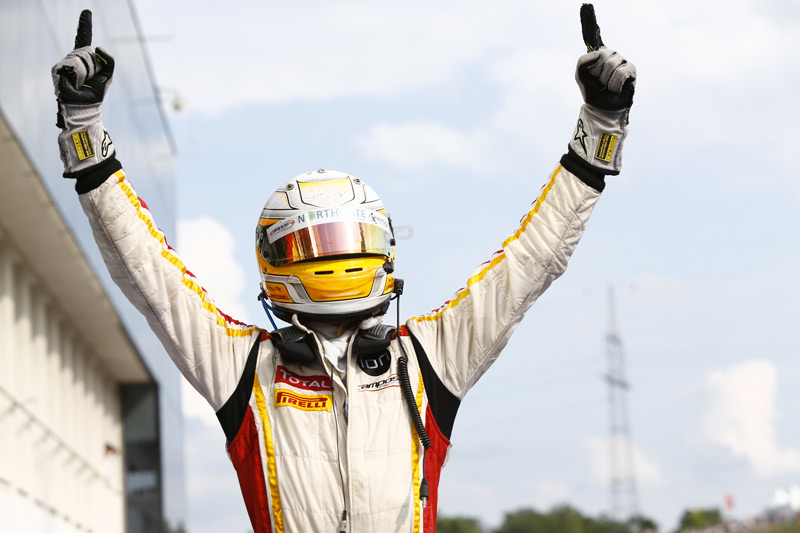 Frenchman on top in topsy turvy feature race
Arthur Pic has claimed his maiden GP2 win with a remarkable drive in difficult conditions, keeping cool as two safety car periods threw everyone’s strategies out the window and pushing when needed to pick up the victory in today’s feature race in Budapest ahead of Stefano Coletti and Adrian Quaife-Hobbs.

The start suggested a very different race when series leader Jolyon Palmer blasted past the Campos pair of Pic and Kimiya Sato to slot in behind the front row starters Felipe Nasr and Tom Dillmann, with Stoffel Vandoorne and Raffaele Marciello also swamping Pic into turn one as the Frenchman just held off Johnny Cecotto: Palmer eased by a slower Dillmann next time by and it looked like the result had almost been written.

But when Sato and Stéphane Richelmi came together at the chicane at the top of the circuit on lap 5 the resultant safety car gave those drivers in the softer compound the chance to roll the dice: when the pitlane opened as the field came round Coletti, Quaife-Hobbs and Takuya Izawa gambled on an early stop, with Pic, Marciello (who drove a little too fast and picked up a drive through) and Rio Haryanto in on the next lap, in the hope that the smooth circuit wouldn’t destroy their tyres.

The race went live 3 laps later, with Nasr and Palmer pulling away in a private battle while the rest of the field was stuck behind Dillmann in P3, shortening the gap from Pic (as the first of the pitted drivers on track) and a potential podium place. It was a huge opportunity for Nasr and Palmer to work together to drop the field, but they seemed more intent on stealing a spot from each other than everyone else.

As the laps rolled down Pic’s pace was equivalent to the leaders, with their fierce battle seemingly costing them positions for when their pitstops shook out: Nasr (and Dillmann) came in on lap 25, Palmer the next time through, and they restarted their skirmish immediately, albeit now over P12 rather than P1. Palmer eventually squeezed by 3 laps later, going up the inside at turn one, while just ahead of the pair Nathanaël Berthon and Sergio Canamasas came together, with the Spaniard finding the wall and prompting another safety car period.

With a lot of debris to clear the break was longer than usual, and brought Vandoorne and Simon Trummer in for their stops, promoting Pic to the lead ahead of Rio Haryanto and Coletti: the unfortunate Indonesian stopped under the safety car when his left rear tyre somehow cast itself off his car, and with the clock winding down there was one live lap to go: Pic made a masterful restart to win at a cantor from Coletti and Quaife Hobbs, with Izawa just holding off a fast charging Palmer for P4 and Abt crossing the line with his nose ahead of Nasr. Marciello made up for his earlier disappointment by picking up P8 and reverse pole on the last lap, with Vandoorne also finding a way past the struggling Berthon, who scraped into P10.

Palmer’s disappointment will be assuaged somewhat by his extended lead in the drivers’ championship, leading Nasr by 178 points to 139 ahead of Coletti on 114 points, Cecotto on 100, Evans on 92, Vandoorne on 88 and Pic now on 66 points following his win, the highest place rookie hoping for yet more from tomorrow’s sprint race.