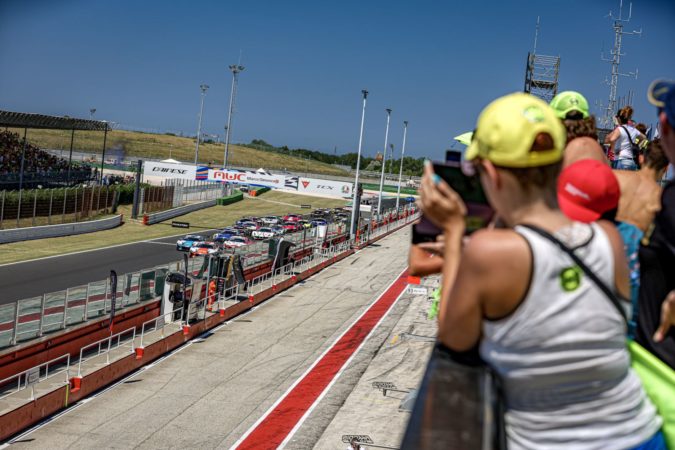 Dries Vanthoor and Charles Weerts will take an 11.5-point advantage into the 2022 Fanatec Sprint finale after completing a clean sweep of race victories at Misano.

The #32 Audi duo followed Saturday’s win with another comfortable triumph, making it seven from nine attempts at the Italian circuit. The result was also highly significant for Vanthoor, who has equalled brother Laurens’ record of 14 Fanatec Sprint wins.

Under clear blue skies and in scorching summer heat, the race played out in front of a packed house of spectators. The majority had made the trip to see Valentino Rossi drive a GT car at his home track for the first time. They were rewarded with a fine display from the Italian, who combined with teammate Frédéric Vervisch to score his best Fanatec Sprint result yet.

Given the tight nature of the Misano circuit, qualifying was always going to be crucial to the outcome of this race. Vanthoor’s blistering 1m30.942s pole lap was the quickest of the weekend and from there it was a case of the drivers and their team doing what comes naturally. Vanthoor was unchallenged at the start, with teammate Chris Mies initially jumping from second to third on the opening lap before Christopher Haase (#11 Tresor by Car Collection Audi) reclaimed the position.

As was the case yesterday the safety car was required at the end of the opening tour following a multi-car incident that eliminated the #111 JP Motorsport McLaren on the spot, while the #66 Attempto Racing Audi and the #54 Dinamic Motorsport Porsche were also forced to retire in the pits. Racing resumed with Vanthoor leading from Haase and Mies, with Raffaele Marciello running fourth in the #89 Akkodis ASP Mercedes-AMG.

Vanthoor pulled into a six-second lead during the opening stint, while the next three cars ran close together. A little further back, Vervisch was putting on a show for the fans at the wheel of the #46 Audi, vaulting from 12th on the grid to run seventh during the opening stages.

Haase was the first of the front-runners to pit. The German handed over to teammate Simon Gachet, but a delay during their stop was to prove costly. When both the #33 Audi and the #89 Mercedes-AMG pitted a lap later both cars were able to jump the Tresor by Car Collection entry, with a superb turnaround from Akkodis ASP allowing Timur Boguslavskiy to re-join in second spot.

Vanthoor was the last of the leaders to make his stop and handed over to Weerts with a comfortable advantage. Behind him ran Boguslavskiy, Jean-Baptiste Simmenauer (#33 Audi) and Haase, while Valentino Rossi took the wheel of the #46 machine in fifth position. The pressure was on, however, with the #88 Akkodis ASP Mercedes-AMG of Jules Gounon looming large in his mirrors.

Though the Frenchman was a few tenths quicker Rossi kept his composure, preventing Gounon from attempting a pass. With the clock ticking down, the race was neutralised for a second time after Lorenzo Patrese found the barriers at the wheel of the #12 Tresor by Car Collection entry. It took some time to remove the stranded Audi, leaving just one lap to run once the safety car pulled in.

Weerts made a great getaway to instantly pull clear of Boguslavskiy. As has been the case for much of the weekend, the #32 Team WRT Audi was in total control at the front and completed a clean sweep ahead of #89 Akkodis ASP Mercedes-AMG. There was a final twist however, as Gachet piled the pressure on Simmenauer and muscled past on the very last run through turn 5, securing a spot on the podium.

There was no such drama for Rossi, who came home fifth to seal his best Fanatec Sprint finish to date and match the result he scored in the recent Endurance Cup event at Circuit Paul Ricard. He was chased across the line by Gounon, while the #563 Imperiale Racing Lamborghini took seventh thanks to a strong one-off outing for Albert Costa and Alberto Di Folco.

While the Pro title will go to the finale, the Silver Cup championship has been settled with a round to spare after AF Corse duo Ulysse de Pauw and Pierre-Alexandre Jean took class victory and eight overall in today’s race. The #53 Ferrari led the early running with Jean at the wheel, but the #30 Team WRT Audi moved ahead shortly after the pit cycle thanks to a clinical move from Thomas Neubauer.

De Pauw had his revenge, however, re-passing the Audi on the final lap to seal the class title in style. This was the AF Corse duo’s fifth win from eight races and keeps them in contention for a top-five finish in the overall standings. The #99 Attempto Racing Audi also passed the #30 on the final tour to seal the second spot on the class podium.

The Pro-Am title will go to the wire, though a perfect weekend for Garage 59 has put the British squad in a strong position to clinch their championship. Miguel Ramos and Dean MacDonald repeated yesterday’s victory to take maximum points from the trip to Italy and capitalise on misfortune among their rivals.

MacDonald started from pole and was unchallenged during the opening stint. He handed over to Ramos, who took the chequered flag ahead of the #52 AF Corse Ferrari shared by Louis Machiels and Andrea Bertolini. MacDonald/Ramos will therefore head to the decider with a 20.5-point advantage over their closest rivals.

The Fanatec Sprint season will take a back seat for the next two months as full focus falls on the TotalEnergies 24 Hours of Spa. The first official session in the Ardennes takes place on Tuesday 26 July, culminating in the main event getting underway on Saturday 30 July.

The short-format championship resumes at Valencia on 16-18 September. Though they hold the advantage, Vanthoor and Weerts will be mindful that the Spanish event was their worst outing of 2021. This gives plenty of hope to Marciello and Boguslavskiy, who will aim to overturn an 11.5-point deficit and prevent the Belgian duo from capturing a third successive Fanatec Sprint title.