BLOCK AND FOUST AMONG STARS COMPETING AT TURKEY RX 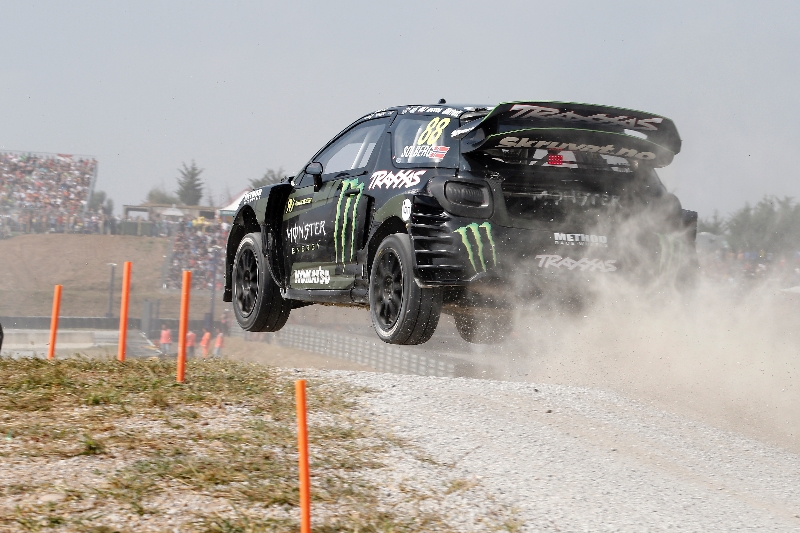 BLOCK AND FOUST AMONG STARS COMPETING AT TURKEY RX
There will be a star-studded showdown at the penultimate round of this year’s FIA World Rallycross Championship presented by Monster Energy as American drivers Tanner Foust and Ken Block compete against each other plus 18 other Supercars at World RX of Turkey this weekend (11-12 October). It will also mark a pivotal point in the all-important Teams’ Championship which sees Volkswagen Marklund, Ford Olsbergs MSE and Team Peugeot-Hansen all vying for the highly-coveted title.

Round 11 of World RX will be staged at Intercity Istanbul Park, which hosted the Turkish Formula One race from 2005-2011. It is also the fourth new venue for RX this season and marks the first time that a rallycross event has been staged in Asia. At 1300 metres in length, the Intercity Istanbul Park is one of the longest circuits of the year. The old F1 circuit will make up a 60% asphalt section, while the remaining 40% gravel track was built in accordance with FIA regulations earlier this year. A total of 30 drivers will compete at Turkey RX including ten entries in the supporting RX Lites Cup – of which Istanbul is the final round.

Finland RX winner Tanner Foust will return to World RX for his fourth outing in the VW Marklund prepared Polo RX Supercar, and is excited to meet fellow countryman Block. “I’m looking forward to competing with Ken in Turkey – we have been competitors for almost ten years and it’s always good to mix it up with him,” admitted the two-time Formula Drift Champion who also presents the American version of Top Gear. “In our last event together we ended each other’s race when Ken re-entered the track into traffic, but there’s no bad blood. I’m just glad to see another American enter the cool world of World RX and hopefully we can have some good hard racing in Istanbul!”

Another driver who is looking forward to flat-out racing this weekend is PSRX driver Petter Solberg whose Championship lead of 60 points means he has secured the World RX drivers’ title with two rounds still remaining. “Turkey is a great place to go for the first time as winners of the 2014 FIA World Rallycross Championship. My speed and commitment will be just as much as ever. In fact, it will be more,” promised Solberg who recently confirmed that he will compete in the 2014 Race of Champions in Barbados later this year. “After Italy, we had a meeting with the team and we talked about the way to play Turkey and Argentina, the final two races of the season, and we all decided that we are going the only way we know: flat out.”

Second in the drivers’ standings and crucial in VW Marklund Motorsport’s quest to win the inaugural World RX Teams’ Championship is Finnish driver Topi Heikkinen who believes the Polo’s engine power could give the Swedish-based squad an advantage. “The track is new for everybody but the asphalt section is the F1 track – really fast, wide and requiring a lot of power from the engine. It should suit our Volkswagen Polo RX Supercar and it should suit me. I will of course fight for second place in the championship but our goal is to win the Teams’ title this year.”

Anton Marklund echoed his team-mate Heikkinen’s comments: “It’s going to be interesting because it’s a Formula One track built into a rallycross track for this event. It’s super-wide, and similar to circuits like Franciacorta or Trois-Rivières, so it should suit our car well.”

Tied alongside VW Marklund at the top of the Teams’ Championship is Ford Olsbergs MSE, which is fronted by rising stars Reinis Nitiss and Andreas Bakkerud. With both drivers having already secured an event victory this season, the Olsbergs team-mates have proved to be a formidable duo. After a string of podium results followed by an event win in Italy last month, Team Peugeot-Hansen have steadily crept up the Teams’ Championship table to sit 13 points adrift of VW Marklund and Ford Olsbergs MSE. Not only is the team aiming for the lead in the Teams’ Championship, but both Timmy Hansen and Timur Timerzyanov are challenging for the top three in the Drivers’ Championship, where the pair currently lie fourth and fifth respectively.

Monster Energy World RX Team, Albatec Racing and EKS RX will also compete in Turkey with the latter fielding two cars driven by WRC star PG Andersson and GT racer Edward Sandstrom. Albatec Racing will produce the first ever father-and-son competing in World RX this season as team owner and driver Andy Scott is joined by his 27-year-old son Marc in a second Peugeot 208 Supercar. Scott Jnr commented: “Although I’ve only raced the older 306 at Croft last year, I have driven the 208 before and I’m confident that I can put on a good show in front of the thousands of enthusiastic World RX fans. I don’t feel under any pressure, I know what I’m capable of and I know the car’s potential, so I’ll just go out there and do my job and get the best results I can.”

Turkey RX will form the final round of the supporting RX Lites Cup but with a 34-point lead, it is mathematically impossible for anybody to beat Kevin Eriksson who was hailed RX Lites Champion in Italy last month. Joining Eriksson in Turkey will be nine other drivers including Swedish RX Lites Champion Kevin Hansen who is currently second in the standings with 82 points. Two drivers who will be firm favourites with the home crowd are Turkey’s Yigit Timur (fourth in the RX Lites standings) and Fatih Kara, who will both drive for Toksport WRT.

Martin Anayi, World RX Managing Director for IMG Motorsport, concluded: “It is quite incredible to think that Istanbul, which is one of the world’s biggest cities and home to more than 14 million people, will host a round of World RX. The fact that we are also using the former F1 circuit and its first-class facilities is also testament to how much our Championship has grown in the past 12 months. I firmly believe that we now have the perfect mix of events, some which are new like Turkey and Canada but others that are traditional rallycross events such as Holjes, Lydden Hill and Loheac. I’m very pleased to announce that the semi-finals and finals on Sunday will be broadcast live on NTV Spor – Turkey’s free-to-air channel which has a household reach of 18 million. It will also be exciting to watch the RX Lites in action for the final time this year – the factory where they are built is situated less than 10 miles from the circuit and it’s great that two of the cars have been entered by local drivers.”