Hot action in Imola: 22 DTM drivers within only one second 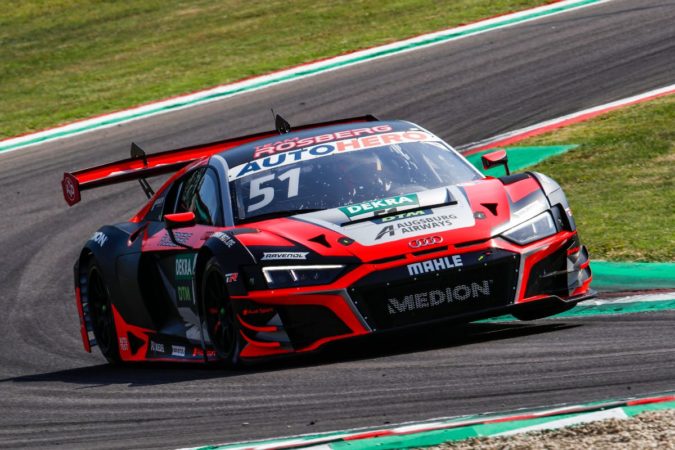 It could hardly have been closer: from the fastest driver of the day, Nico Müller (SUI, Team Rosberg, Audi), down to Canadian Mikaël Grenier, who ended up in 22nd place with the Mercedes-AMG run by the GruppeM Racing team, the lap times of the DTM drivers in second free practice at the 4.909 kilometres long Autodromo Enzo e Dino Ferrari in Imola ranged within just one second. With his time of 1m 40.909s, Müller was the only driver to post a sub-1m 41s lap time and thus ended up as the fastest on the practice day of the DTM round in the Emilia Romagna region.

“It is really warm today,” Nico Müller commented the conditions with an outside temperature of 34 degrees and an asphalt temperature of around 50 degrees. “As a result, it isn’t easy. The tyres reach their limit relatively quickly and then it is difficult to get a lap together. Today, we more or less succeeded. Tomorrow, however, the pack will be reshuffled. Now, we need to analyse what was good today and where we can perhaps still find something. Over night, we have to work hard to find some more performance, but being quick starting into the weekend is always good.”

DTM Trophy: Project 1 youngsters Henkefend and Caresani to the fore in closing stages

In DTM Trophy, the two youngsters from the Project 1 team, Louis Henkefend (GER) and Colin Caresani (NED) ended up in the first two places of the day’s aggregate following a strong offensive in the closing stages of second free practice. Henkefend’s time of 1m 53.132s was the fastest of the practice day in the talent pool on the DTM platform.

For a long time, American JP Southern with his Audi R8, run by Eastside Motorsport, looked set to end up fastest with his time of 1m 53.380s from first free practice, but in the second session, Henkefend and Caresani, both graduates from last year’s BMW M2 Cup, increased the speed once more. Theo Oeverhaus (GER) in the Walkenhorst Motorsport BMW also beat Southern’s time, the latter ended up fourth in the classification of the day.

On Friday, there was also a free practice session for the new DTM Classic DRM Cup that has its first event at Imola. In the morning, practice was stopped after a few minutes already as a trace of oil on track got in the way of any further action. Late in the afternoon, the participants were given another chance to prepare for the two qualifying sessions and the two races. In the process, the classic race cars from the 1970s caused excitement with their sound and their looks.

This weekend, DTM is racing at the Imola Grand Prix circuit in the Emilia Romagna region for the first time. The races start both on Saturday and Sunday at 1.30pm CEST, broadcast live on ProSieben in the German-speaking region from 1pm. All practice sessions and both races can also be watched live on the streaming platform DTM Grid (grid.dtm.com).