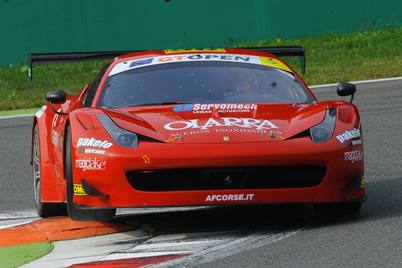 Ruberti-Roda (AF Corse) surprise in free practice
Mild weather and perfect conditions welcomed the 20 cars in Monza on Friay for the two practice sessions. On a power track like this, it c was a surprise to see a GTS car ending the day on top of the rankings, as Paolo Ruberti and Giorgio Roda put the AF Corse Ferrari F458 GT3 on top of the timesheets, with a time of 1.48.396 signed in session 1, preceding by less than one tenth another GTS Ferrari, the SMP Racing of Aicart-Maleev. The Corvettes took third and fourth, with the second V8 and the SRT cars, right ahead of the SMP Ferrari of Zampieri-Mavlanov, the fastest car in the afternoon.

The title contenders focused on working on the set-up, with the Villorba Ferrari in P8 and the V8 Corvette in P10, while the new-comers did well, as the Reiter Camaro of Enge-Völker finished the day with the 7th-fastest time despite only doing 9 laps in session 2, and the Monaco McLaren in P14.

Thomas Gruber, who hadn’t raced since Nürburgring 2012, was delighted to be back at the wheel of one of the Autorlando Porsches but said: “I still have to take much rust off”, while Kelvin Snoeks was a last-minute entry, as the Dutchman former single-seater driver subs for Sijthoff on the second V8 Corvette.