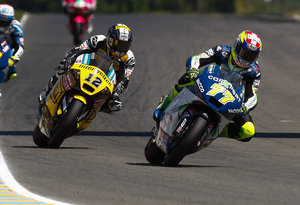 Moto2 2015: one swiss structure, two teams, three riders
With the support of Olivier Métraux, the Chairman of the Board of Directors of the Swiss Automotive Group – the owner of Technomag, Derendinger and carXpert –, M. Daniel-M. Epp, the owner of the Team Paddock-Interwetten Moto2, riders Dominique Aegerter, Thomas Lüthi and Robin Mulhauser, Frédéric Corminboeuf, the CEO of the CGBM Evolution society, it has been announced this Friday 12 September on the circuit of “Misano Marco Simoncelli” the acquisition of the company Team Paddock-Interwetten Moto2 in the upcoming 2015 season.

“Our current structure – Team Technomag-carXpert – will continue its activities with the same people surrounding our two riders Dominique Aegerter (fourth in the provisional Moto2 World Championship classification with a debut win in Germany) and Robin Mulhauser, who will continue to learn with us next year. Our second team – Team Derendinger-Interwetten – will only compete with one rider, Thomas Lüthi, the 125cc Champion from 2005, seven time Grand Prix winner, sixth overall in the provisional 2014 Moto2 World Championship classification. I am extremely pleased to have him with us.”

For practical reasons, the two structures will be based under the same roof, on the CGBM Evolution premises in the Parc d’activités de Signes near the circuit of Paul Ricard in Castellet (France). “In the paddock, we are going to have two separate boxes,” explained Frédéric Corminboeuf as he expects obvious rivalry between two such experienced riders: “There will be synergies, in winter testing and the development of material in particular,” he continued.

If this has ever happened in motorcycle racing before that Switzerland would put Swiss riders together, it has never been two riders capable of challenging for a world championship title put together in the same category. This is what will happen in 2015 with Dominique Aegerter and Thomas Lüthi.

For both of them, this new step in their career will also be significant for the technical change of a great importance: the Team Technomag-carXpert and Derendinger-Interwetten riders will be competing with a Kalex chassis in 2015, which they will receive the day after the Grand Prix of Valencia – the last race of the 2014 season – to be able to carry out their first winter test.